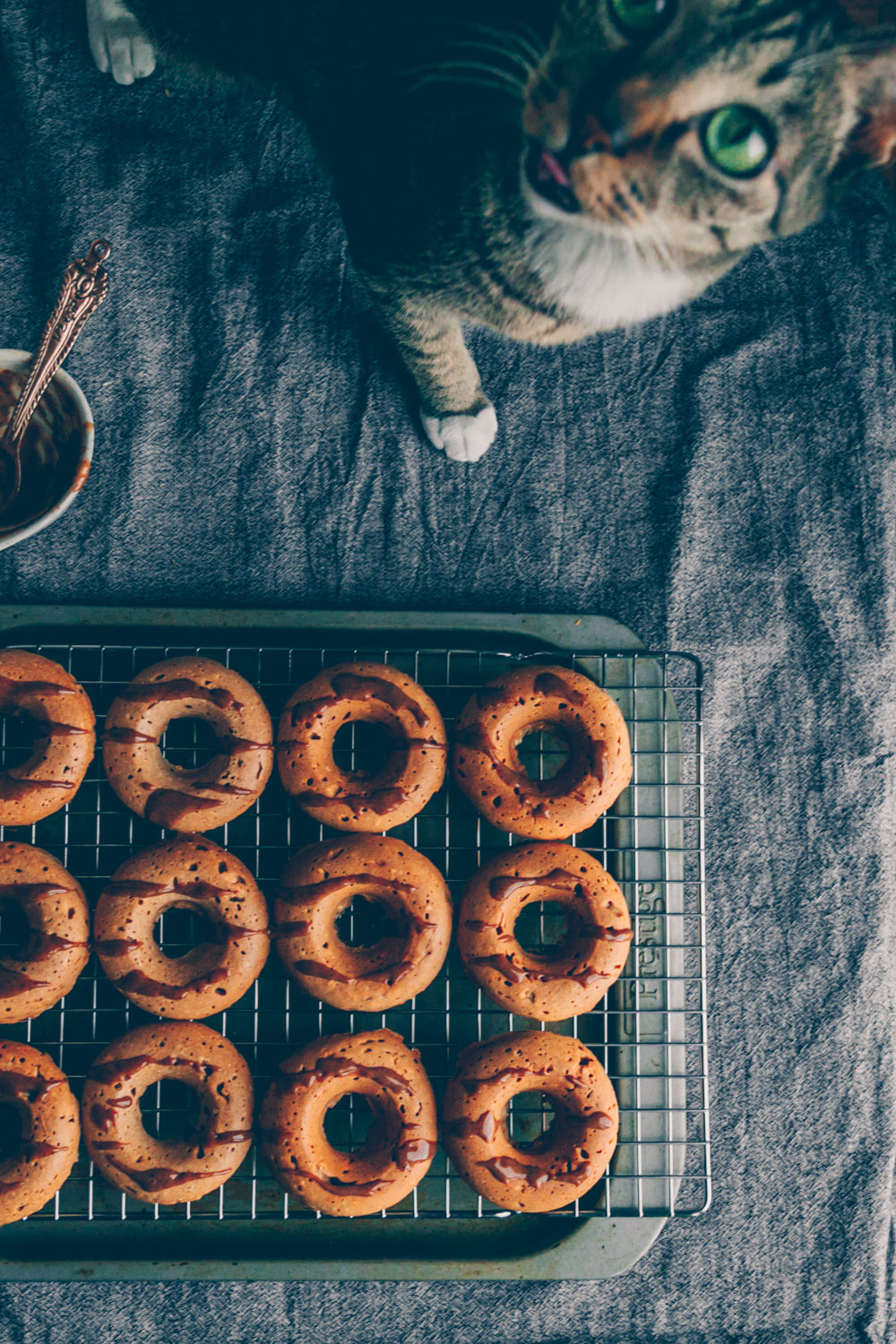 This is probably the toughest post I’ve written to date. Why? I’m on a juice cleanse and I didn’t prepare any content for my blog or Instagram. I was however smart enough to shoot some photos over the weekend as I’d imagine it would be a little challenging (read impossible) to cook or bake something while on a juice cleanse. So at least, these photos don’t smell like freshly baked banana bread but I still had to edit them and write down the recipe for you. You’re welcome! Because banana bread turned into doughnuts need to be in everyone’s life and I didn’t want you to miss out on it any longer. I have most of the batch waiting for me in the freezer for when I’m done with my cleanse the day after tomorrow.

Though, writing this post wasn’t the easiest task of today, I’m thankful and glad I did it. I’ll be (hopefully) putting together a post about my juicing experience soon but this 3-day cleanse is as much about getting back on healthy food track as it is about self discipline. Yes, I hear you and myself say “Don’t be too harsh on yourself”. I’m not. I just want to prove to myself that I can still begin and finish something even though it’s hard. And trust me, I thought this juice cleanse would come easy for me. But it’s much more challenging than expected. And writing down the recipe for these banana bread doughnuts is just another milestone I managed to reach. 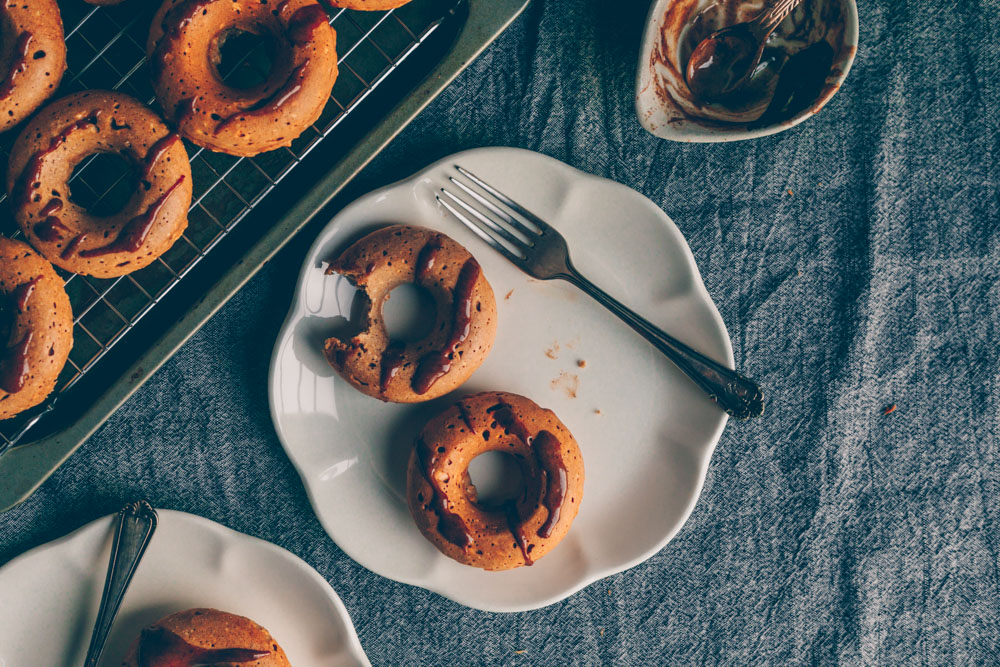 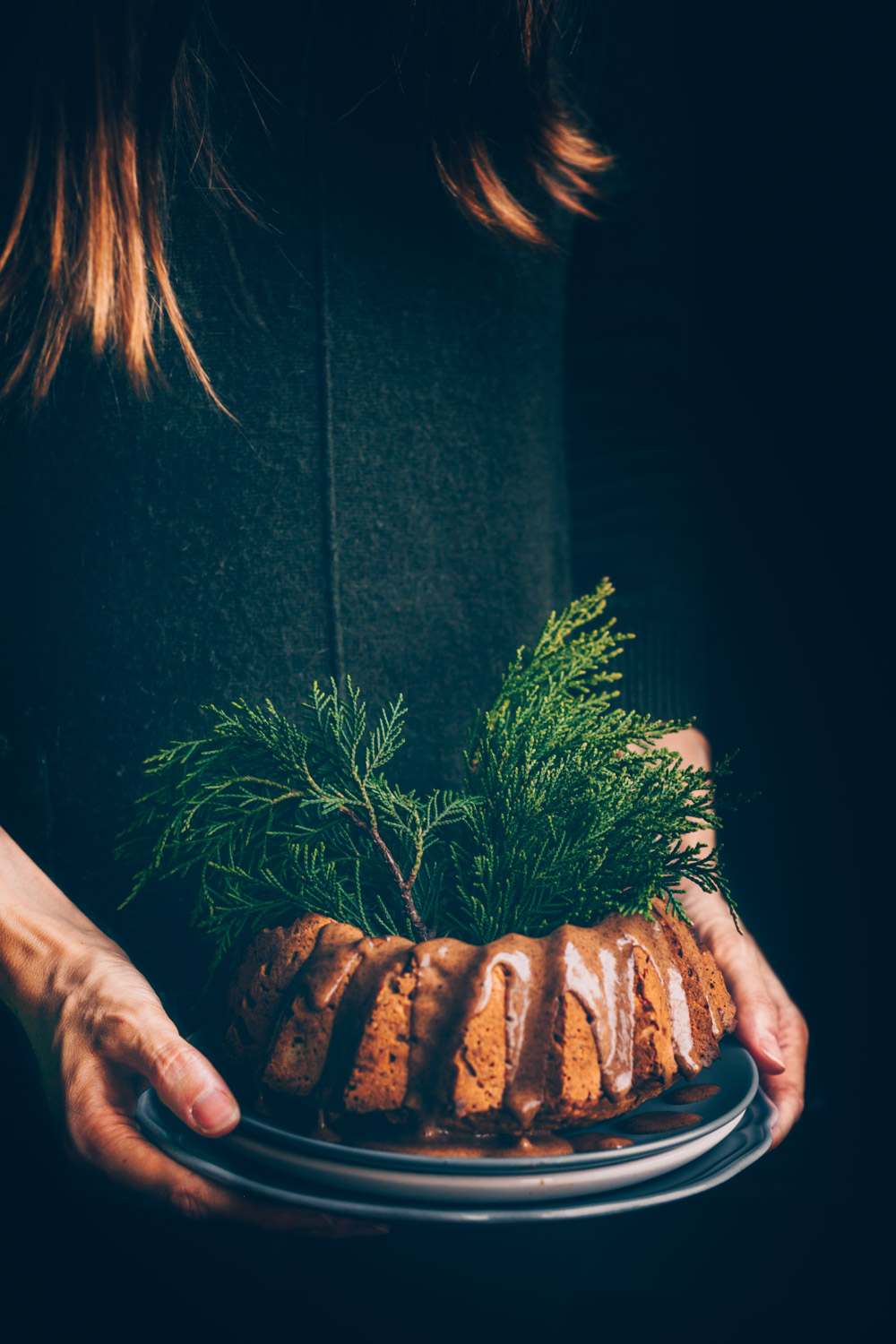 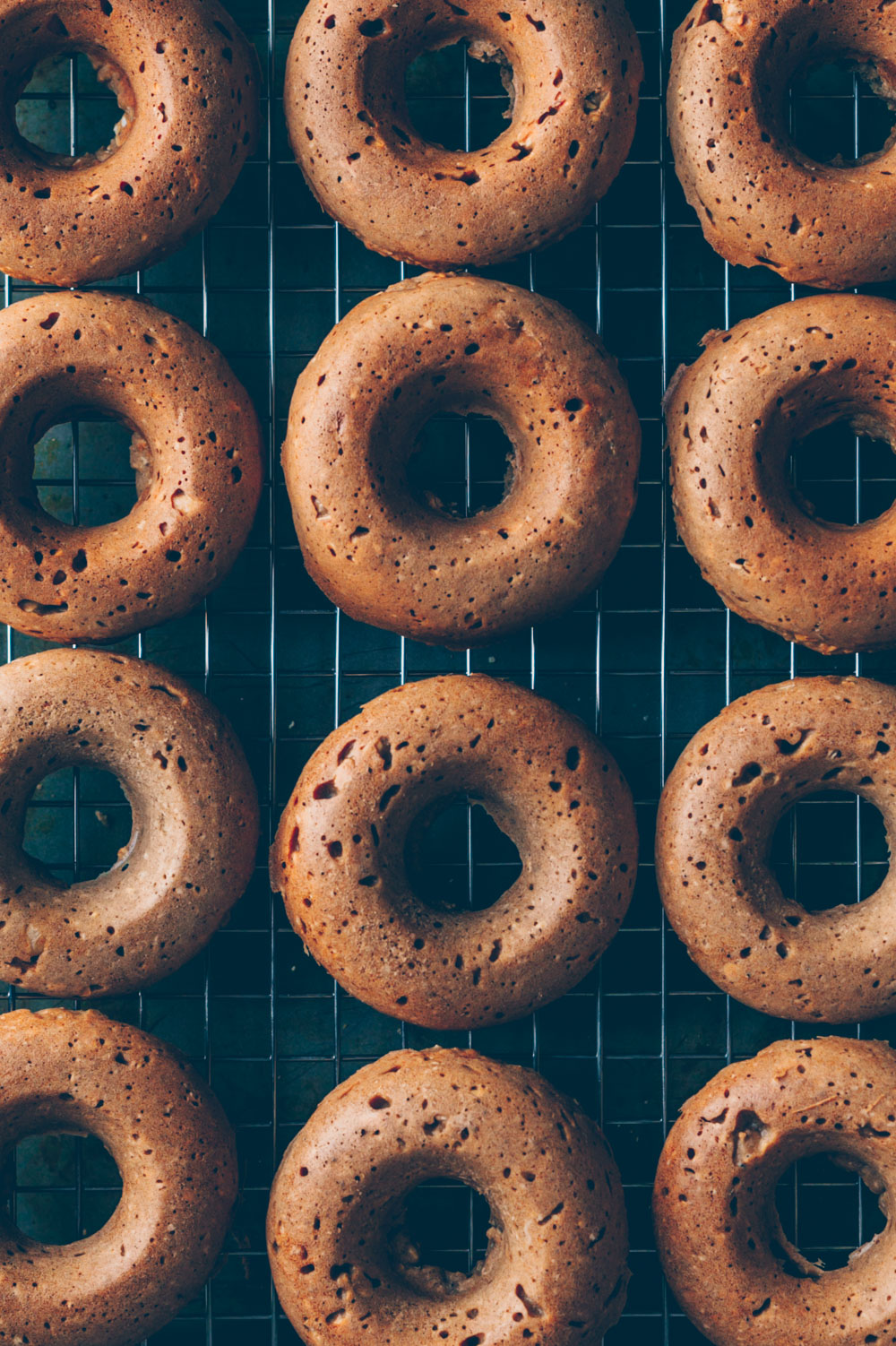 I’ve always been a hard-working and disciplined person but I’ve never been a finisher. Not because I gave up but because something new and more interesting entered my life. Just like yesterday. I was doing some research about juice cleanses and thereby learned that there is such a thing as soup cleanse. So I made a grocery list in my head for potential recipes and was determined that a soup cleanse would be much more fun for me, especially since it’s still winter and I’ve been freezing non-stop despite waterfall-like amounts of hot tea. That’s what I mean with being disciplined enough to finish something. Eventually, I didn’t go to the supermarket but stayed at home, took a hot bath and kept drinking my juices.

I still have another evening and whole day to prove to myself that I can be a finisher. And once this is achieved I will go on to my next project, a woven wall hanging. Here, I said it. You read it. Which means I have to turn off my laptop and phone in the evenings from now on and finally get started on what I’ve been planing since last year November. A woven wall hanging for my stepsister’s newborn. If that fails or will take too long (there is only so much time to give somebody a gift for their newborn, right?), I’ll bake her these vegan Banana Bread Doughnuts. 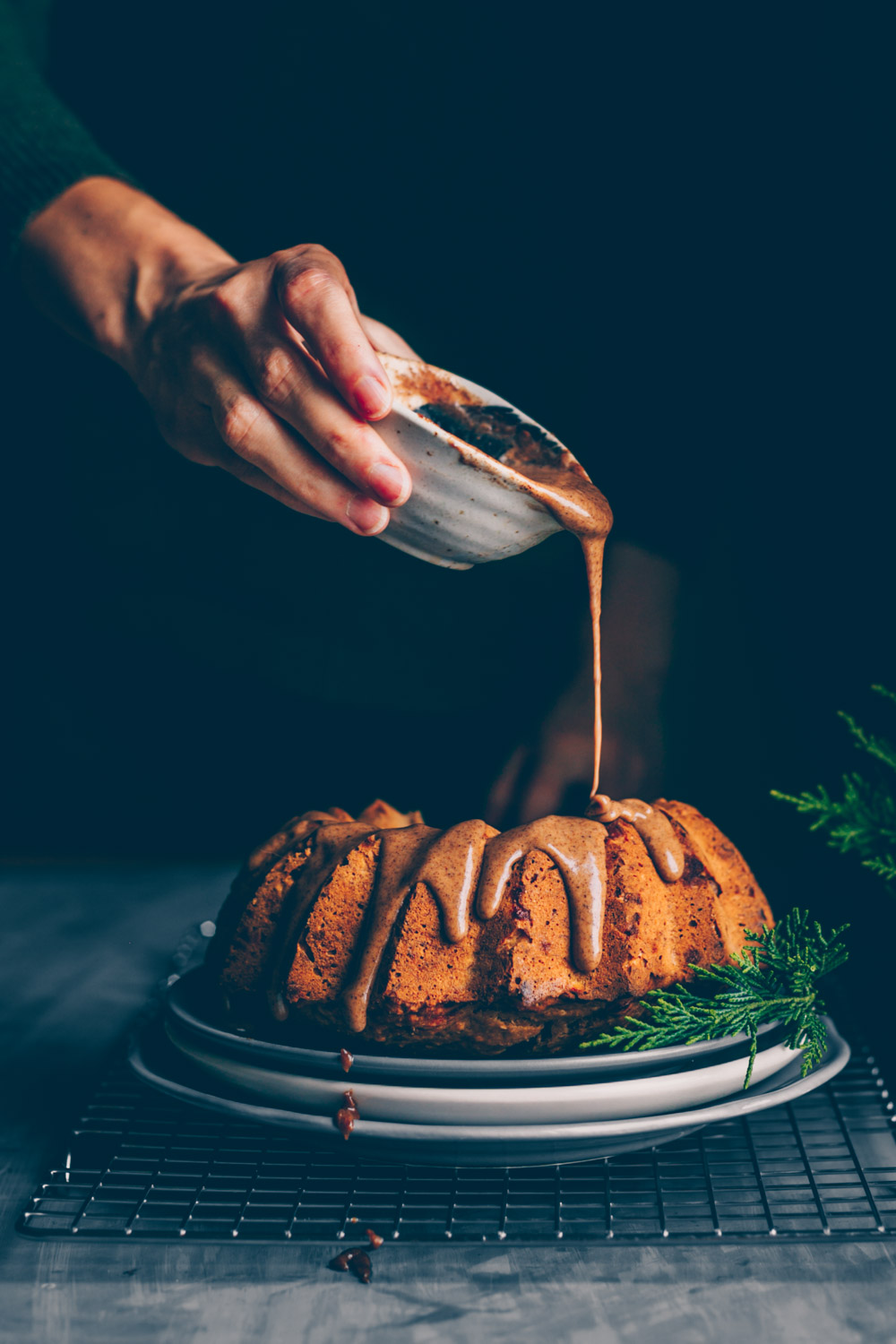 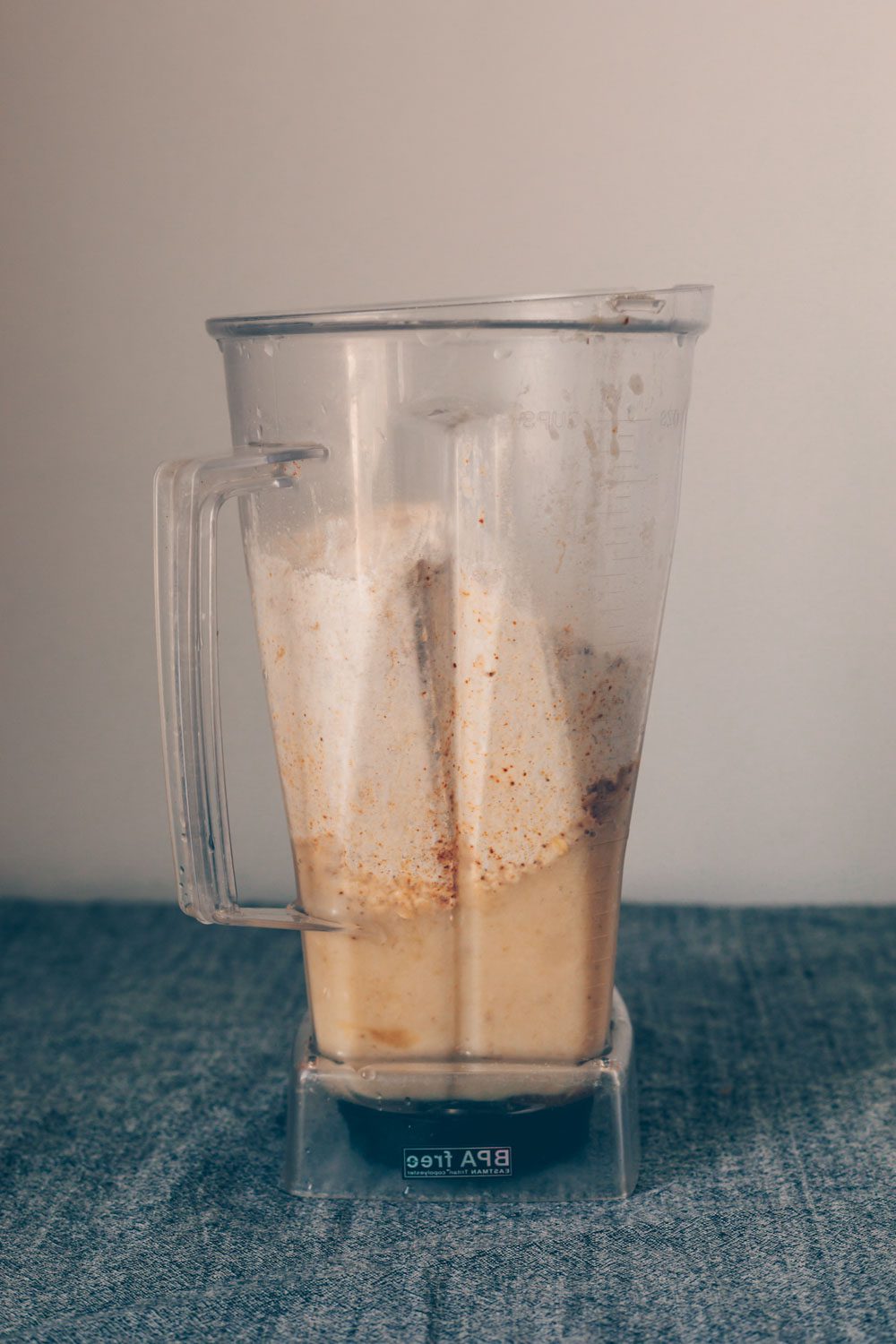 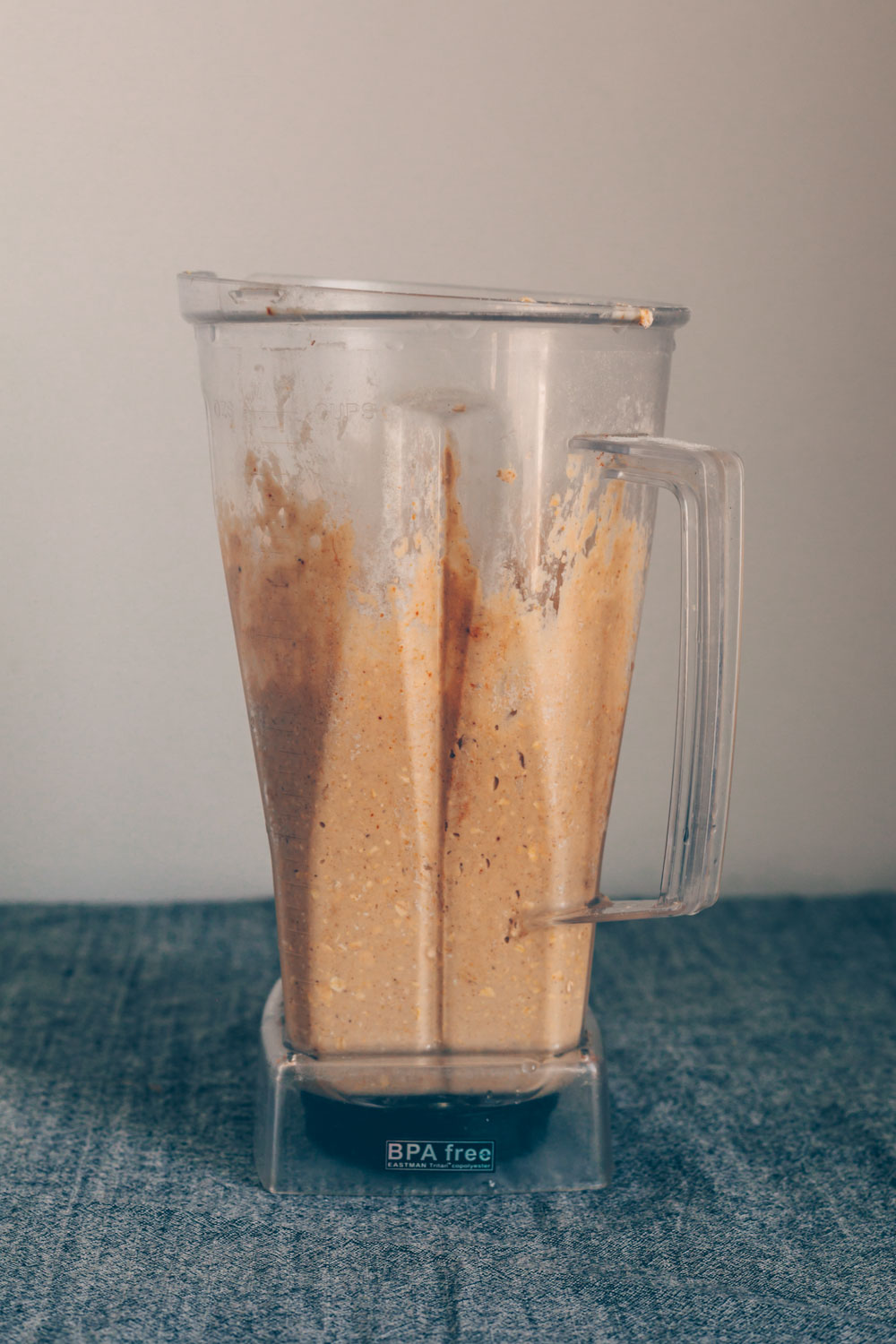 The recipe for the banana bread dough is yet again inspired by Minimalist Baker’s One Bowl Gluten Free Banana Bread. Dana’s original recipe is gluten free, so hop over to her side if you prefer that.

You can either make doughnuts, a pound cake or normal banana bread with it. I love the doughnut version because it only takes 12 min to bake and thus serves as a super quick dessert or afternoon tea idea. Another thing I love about this recipe is that you don’t need to have fresh bananas at home. If you have a high speed blender you can just use frozen bananas instead. I always have a bag of ripe frozen bananas in my freezer because it’s sometimes difficult to get ripe bananas in our local supermarket. So the frozen banana option is for times when you crave banana bread but don’t have fresh bananas at hand.

Let’s talk about the cinnamon tahini frosting (yes, it tastes as good as it sounds). I’m not a chocolate lover so I’m always on the lookout for different kinds of flavours. I also don’t like sugary and buttery frostings so I came up with an easy to make 3 ingredient cinnamon tahini glaze. You can also make more and use the leftover to drizzle it over your granola or smoothie bowl. The flavour is quite intense by its own but fits together perfectly with the taste of banana bread (doughnuts). 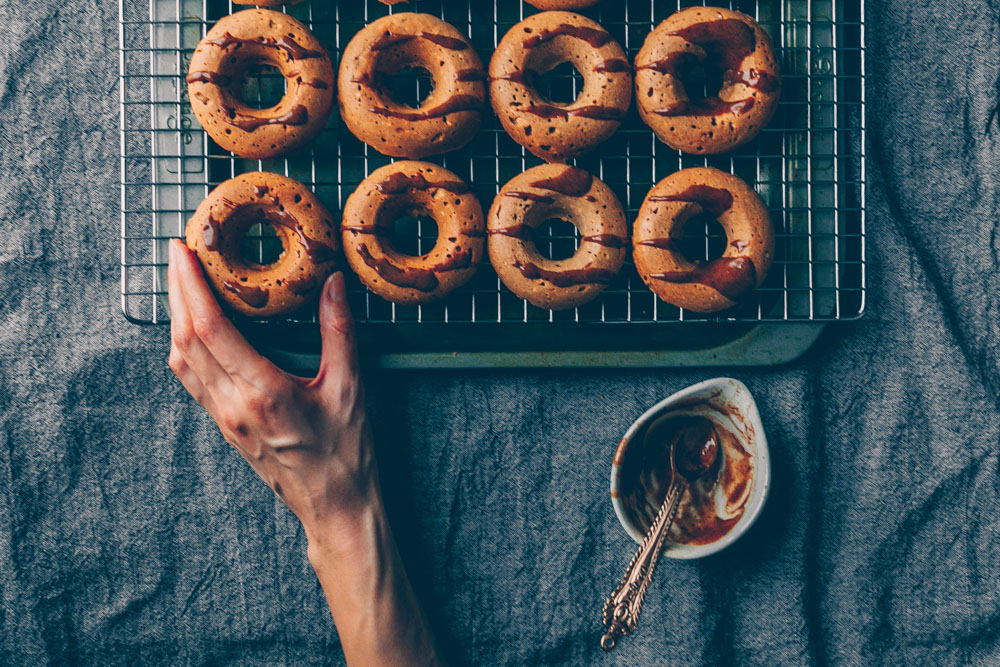 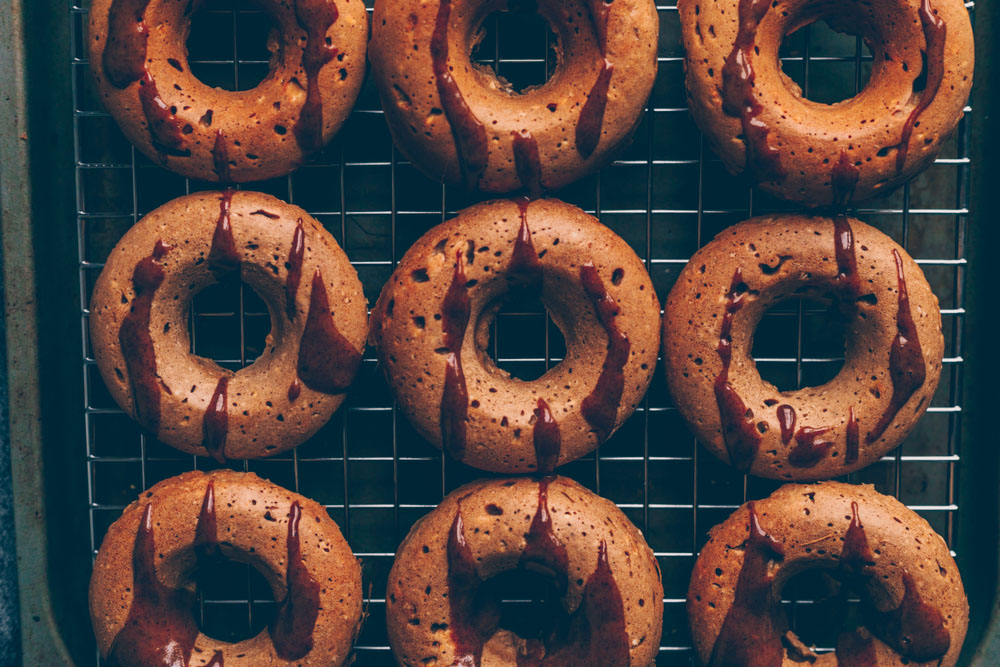 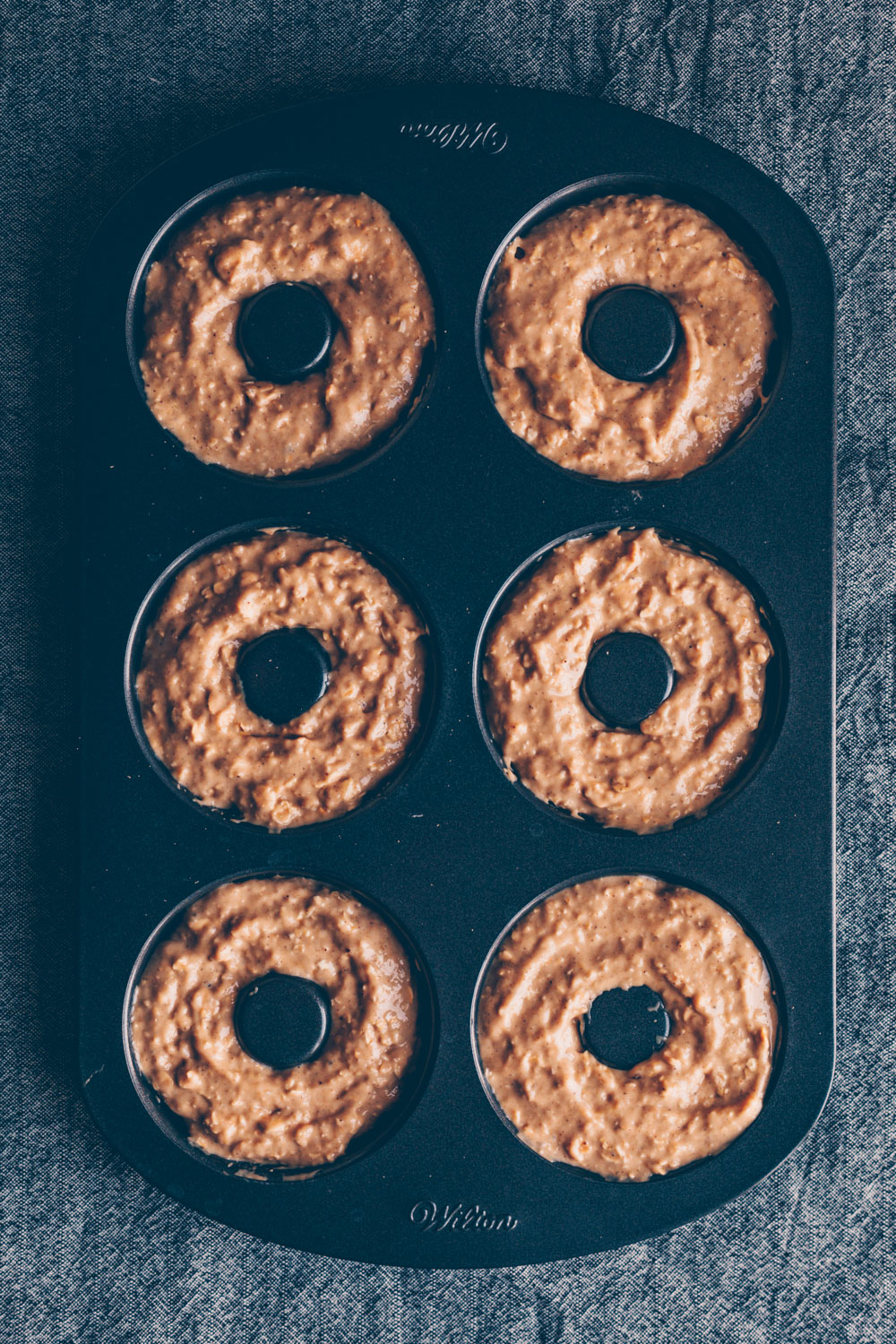 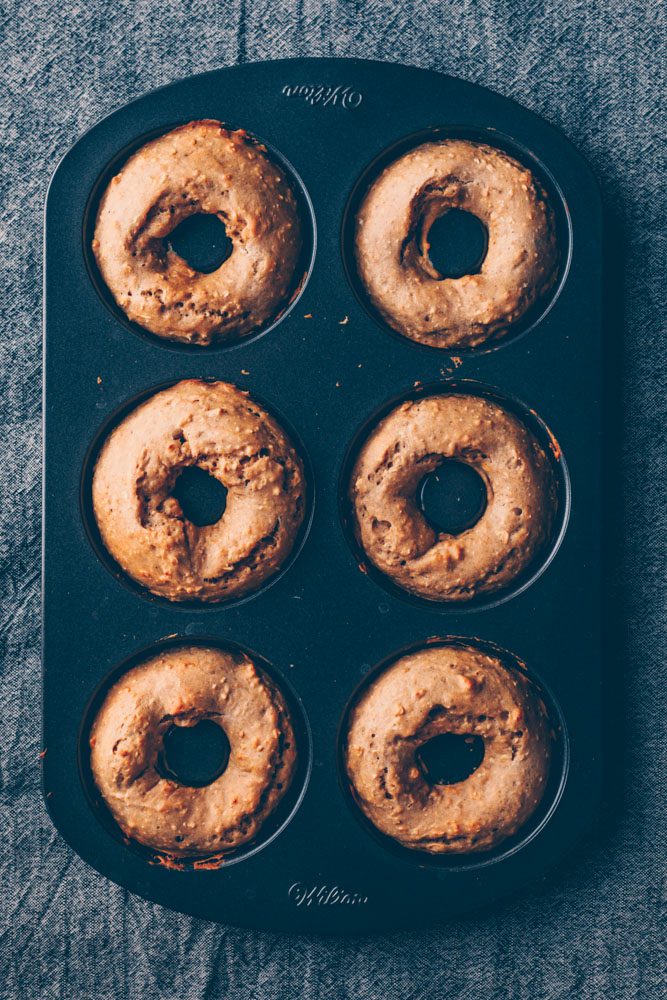 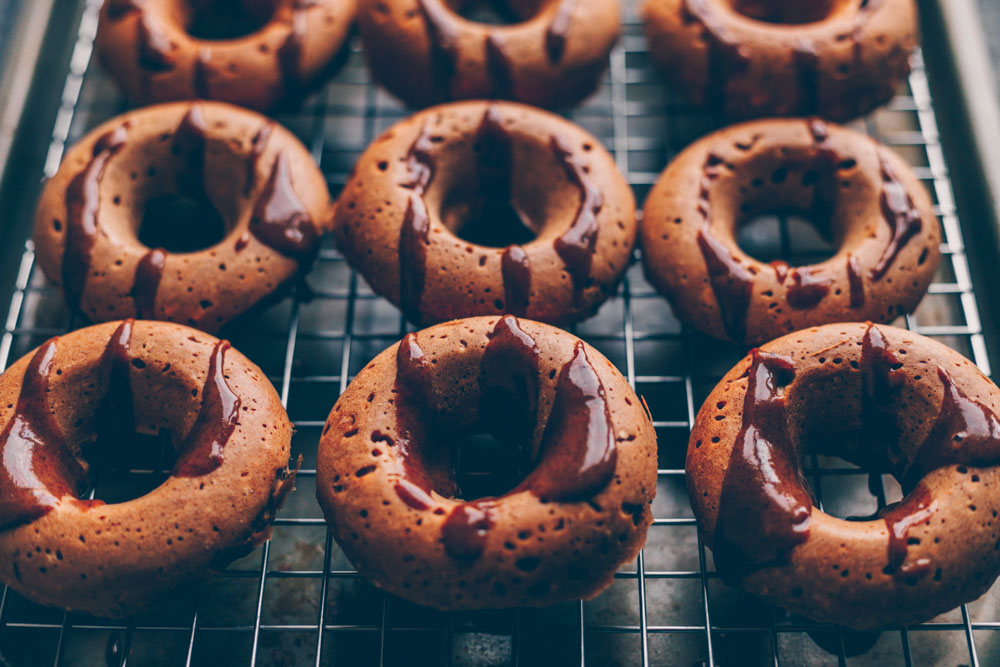 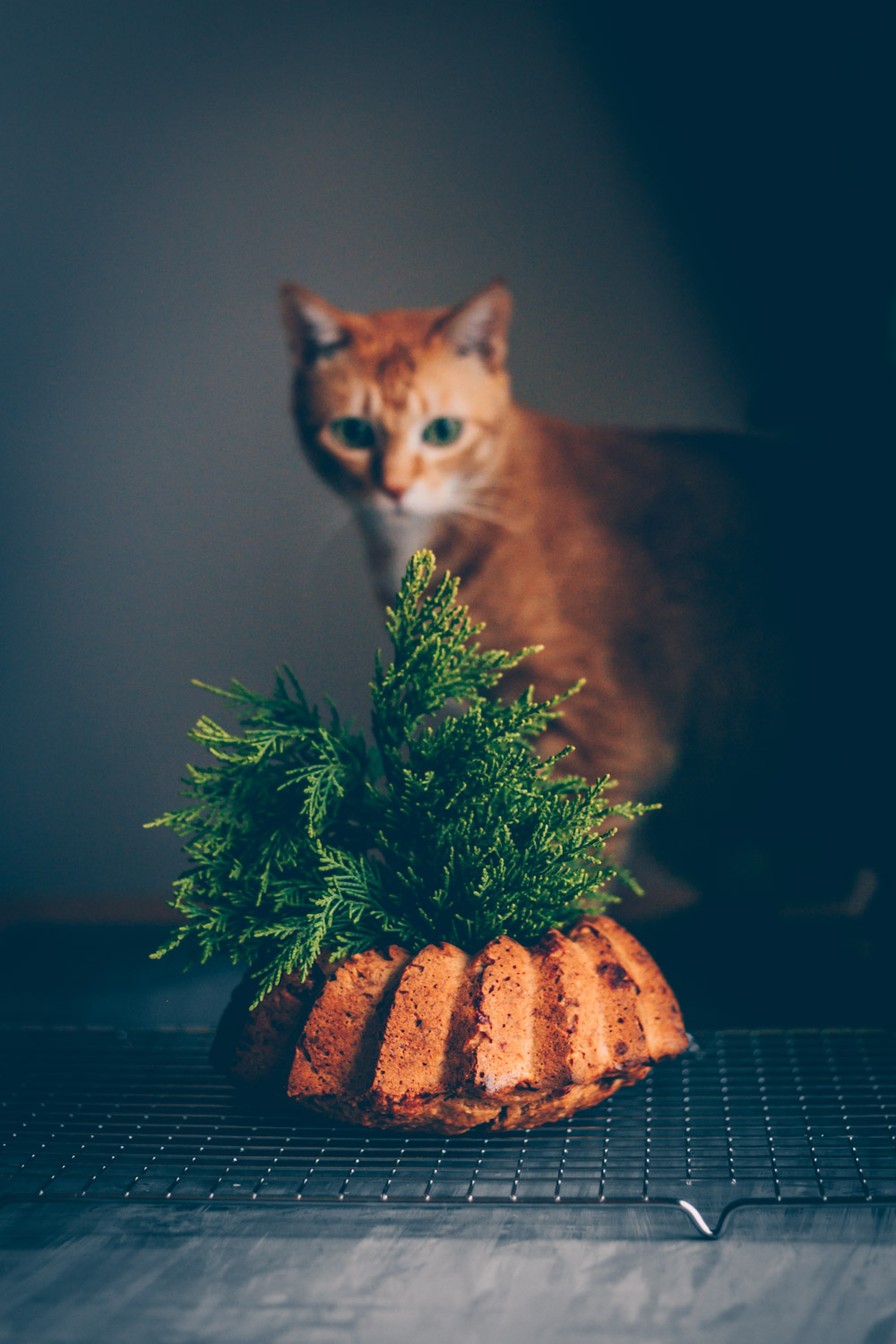