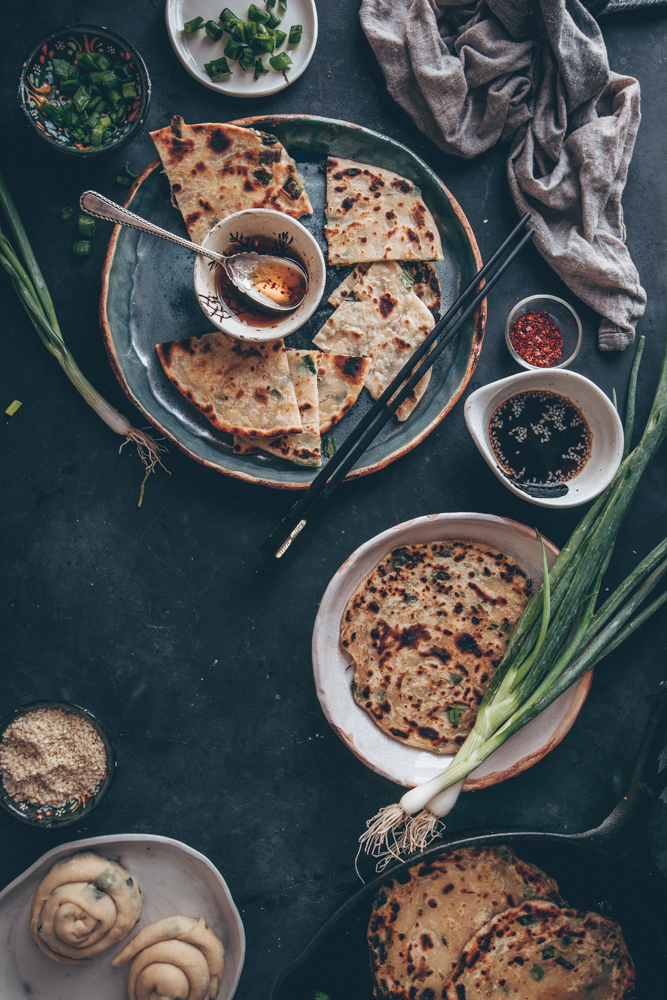 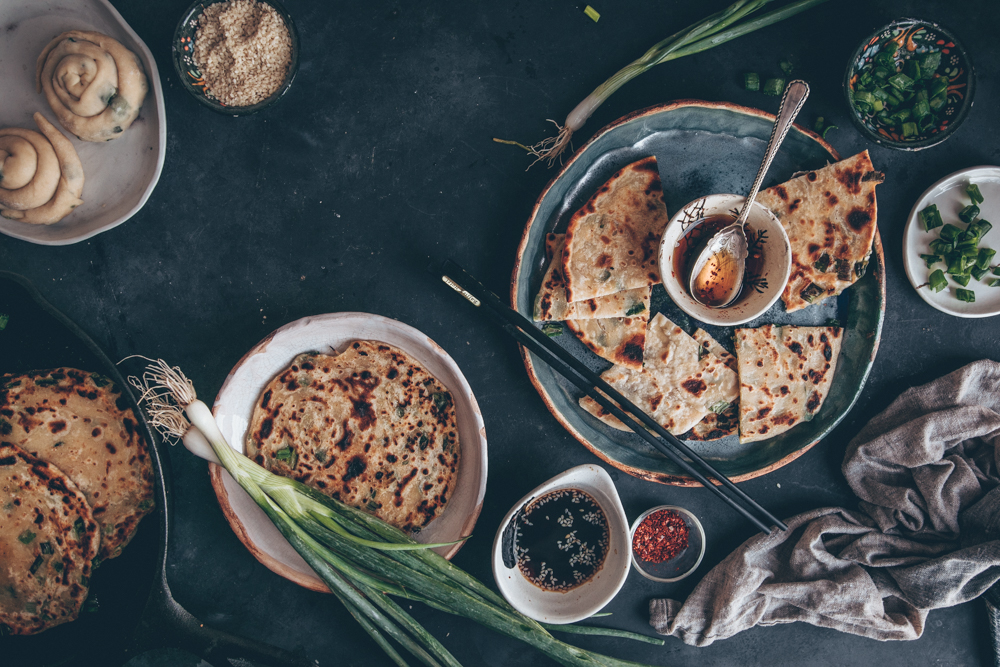 I’m writing this in pain. Pain from my wisdom tooth extraction I had end of last week. Pain from the construction work going on in our building because the management is replacing the lift and this somehow only can be done by using an air hammer of some sort for 6 hours straight. As construction work and tooth pain isn’t enough. Our newest addition to the family, the three-legged cat named ‘Monkey’ was recently introduced to the whole flat and our other two cats. Since then he’s been meowing and howling and yowling non stop. I understand he is afraid and scared but yap, my nerves are raw. I can only now imagine what it means to have a baby, though the comparison to tooth pain and construction work is slightly (read very) unfair.

But in all honesty, what do you do when you yourself feel bad but you can’t really heal because your surrounding is so demanding and noisy and distracting? Well, I for my part turn on some cat music (yes, there are people like David Teie who compose music for cats to calm them down), close the kitchen door behind me and start to cook. I’ve talked before about the therapeutic effect of kneading, rolling, frying, drizzling and brushing but in stressful times like these I appreciate the process of cooking and baking even more. 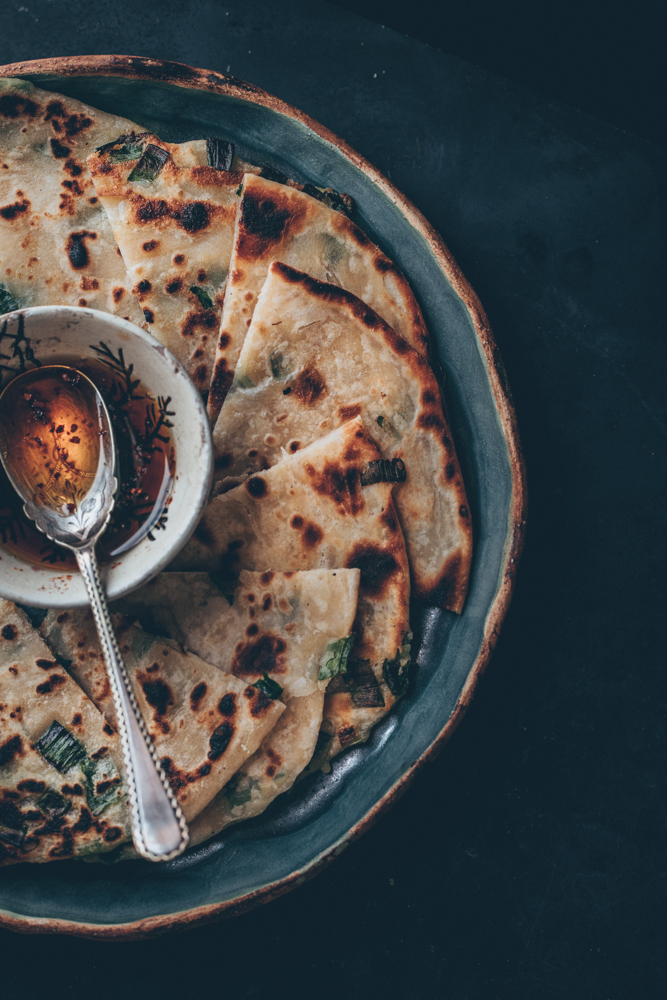 When I try to find recipes I always look at the countries I have already visited. I go through my trips in my head again, thinking of the places I ate at, the food I enjoyed or the dishes I smelled. Strangely enough I haven’t thought about China or Hong Kong much lately. I mean i think about them all the time because I used to live in Hong Kong for almost two years but I haven’t though about their foods. So the other day when I went through my Stories I saw Sneh of Cook Republic making Chinese pancakes and that’s when it hit me. I’m not kidding but when I lived in Hong Kong, Chinese pancakes were one my my favorite fast foods.

I’m honestly surprised at myself that i haven’t tried, let alone thought about them for such a long time. I used to visit Mr. Bing on a weekly basis, even though they do make slightly different pancakes from another region in China. I recently saw that they opened some locations in the USA, in NYC. So if you are at least vegetarian and would like to have some Northern Chinese food, go visit them and thank me later 🙂 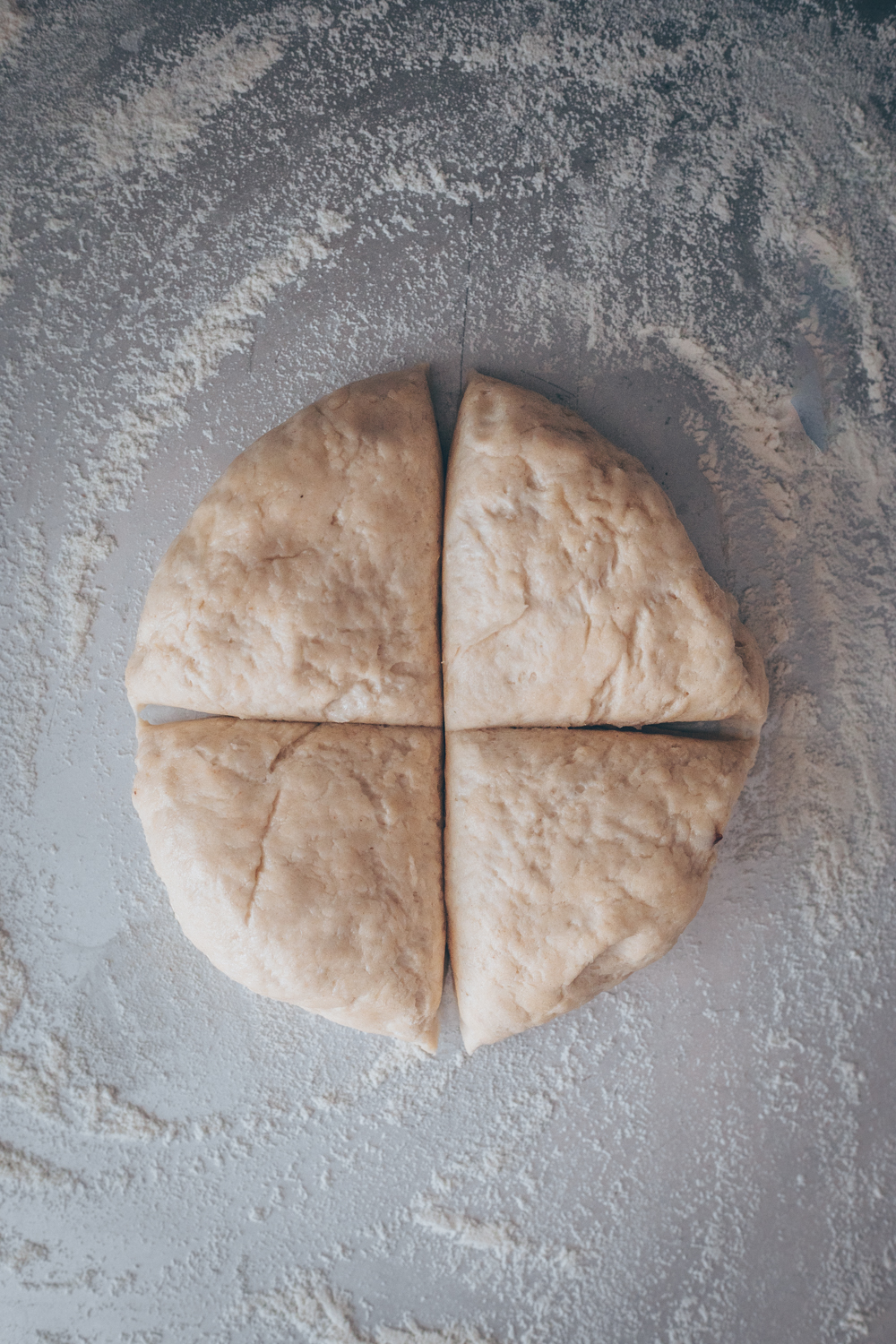 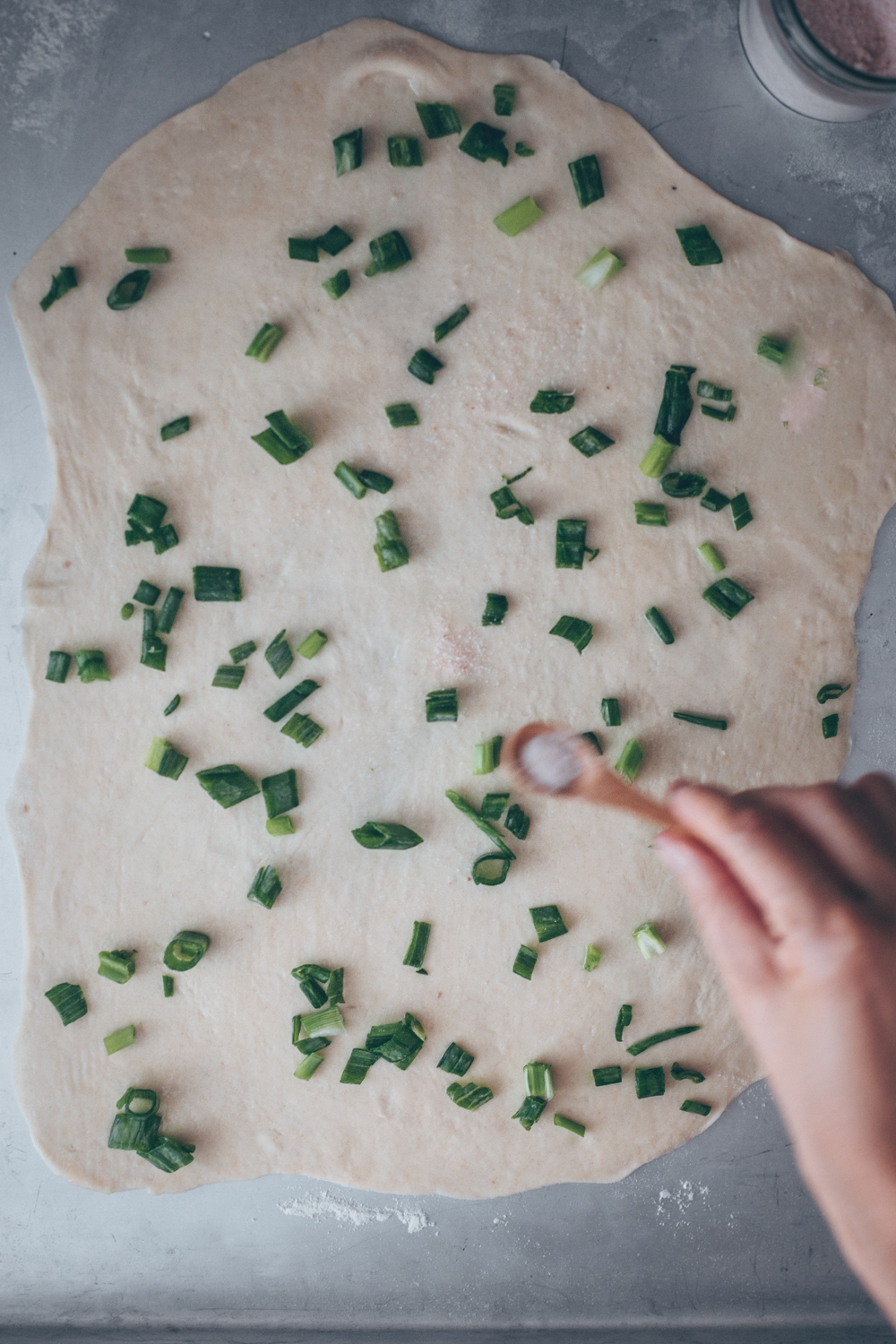 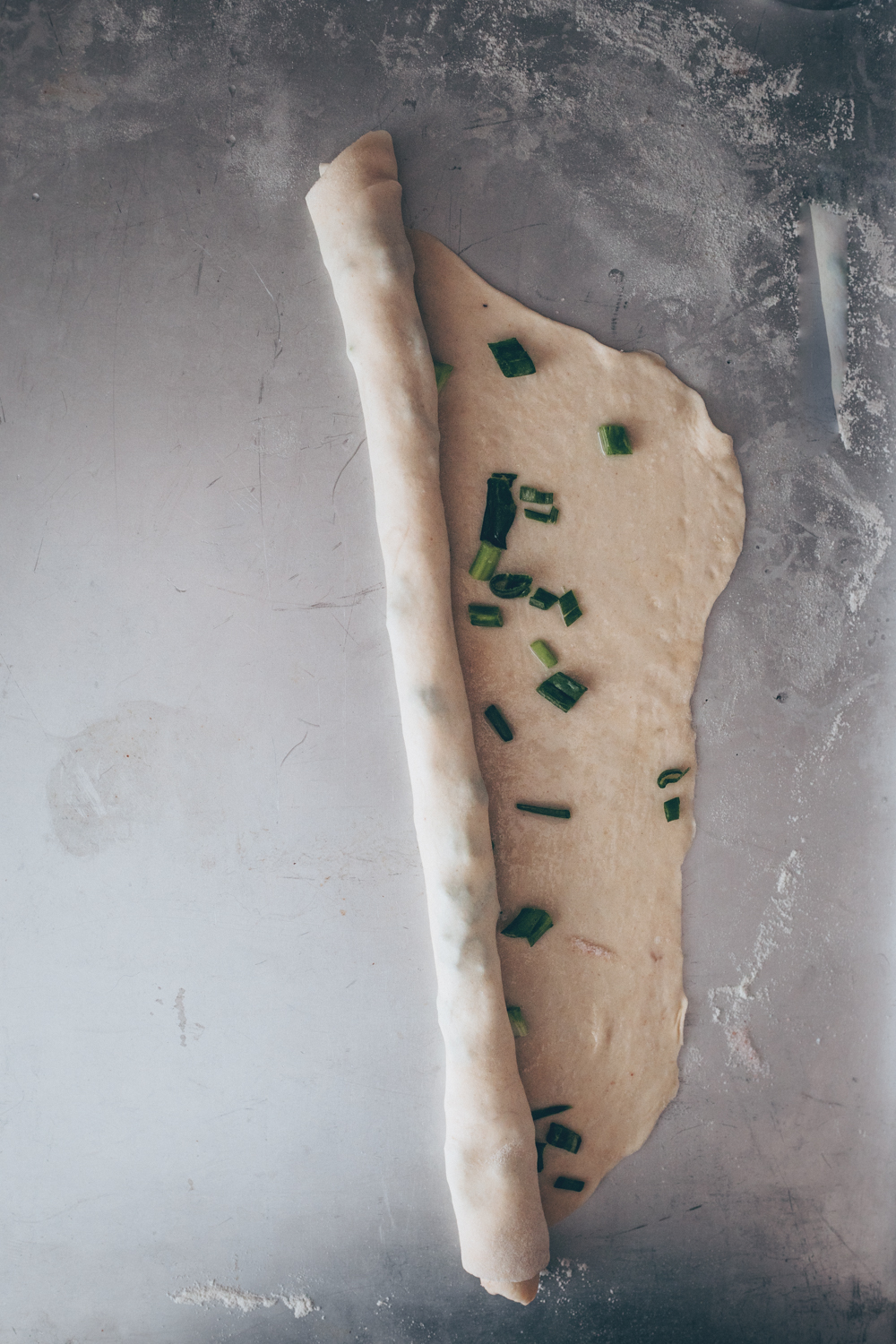 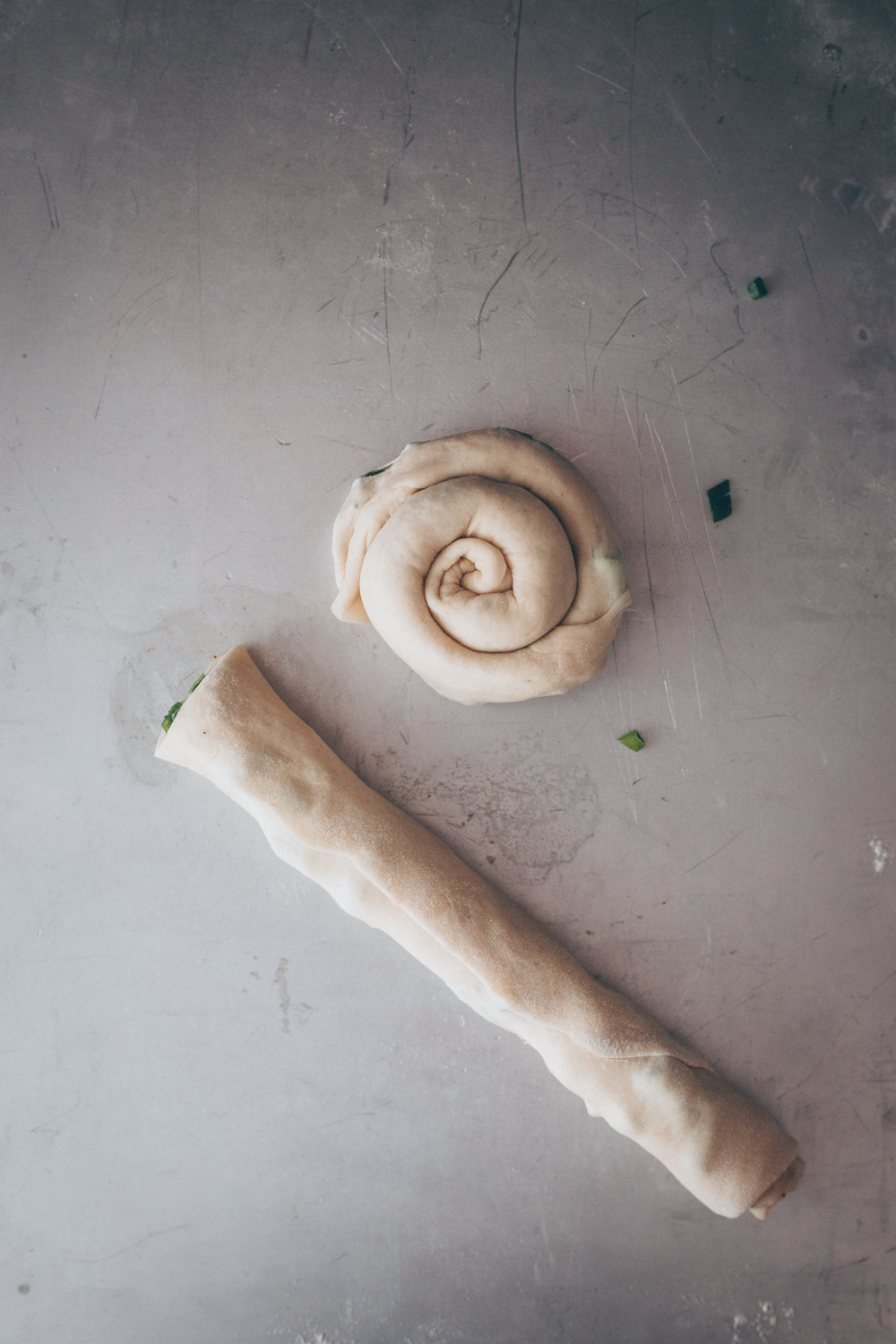 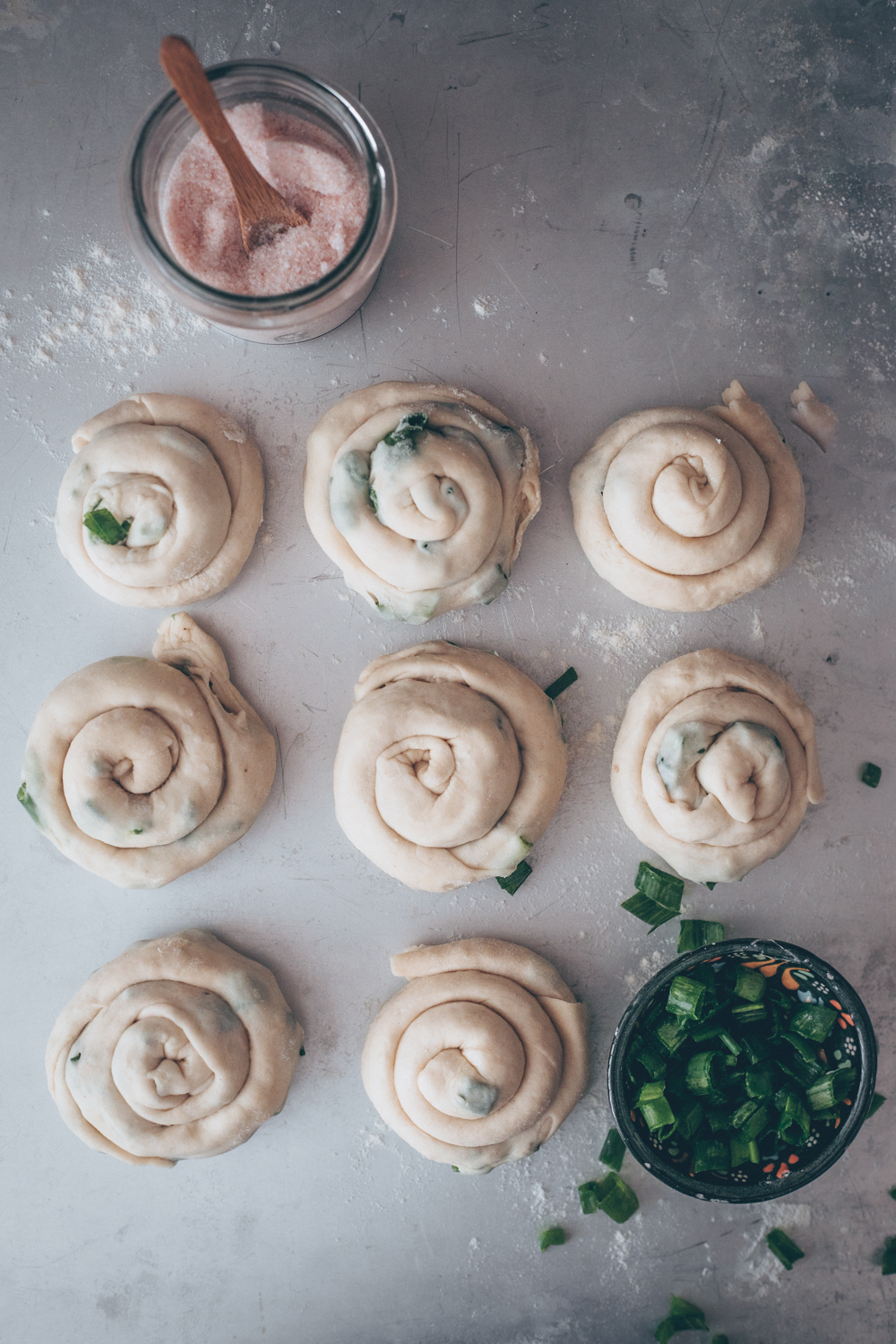 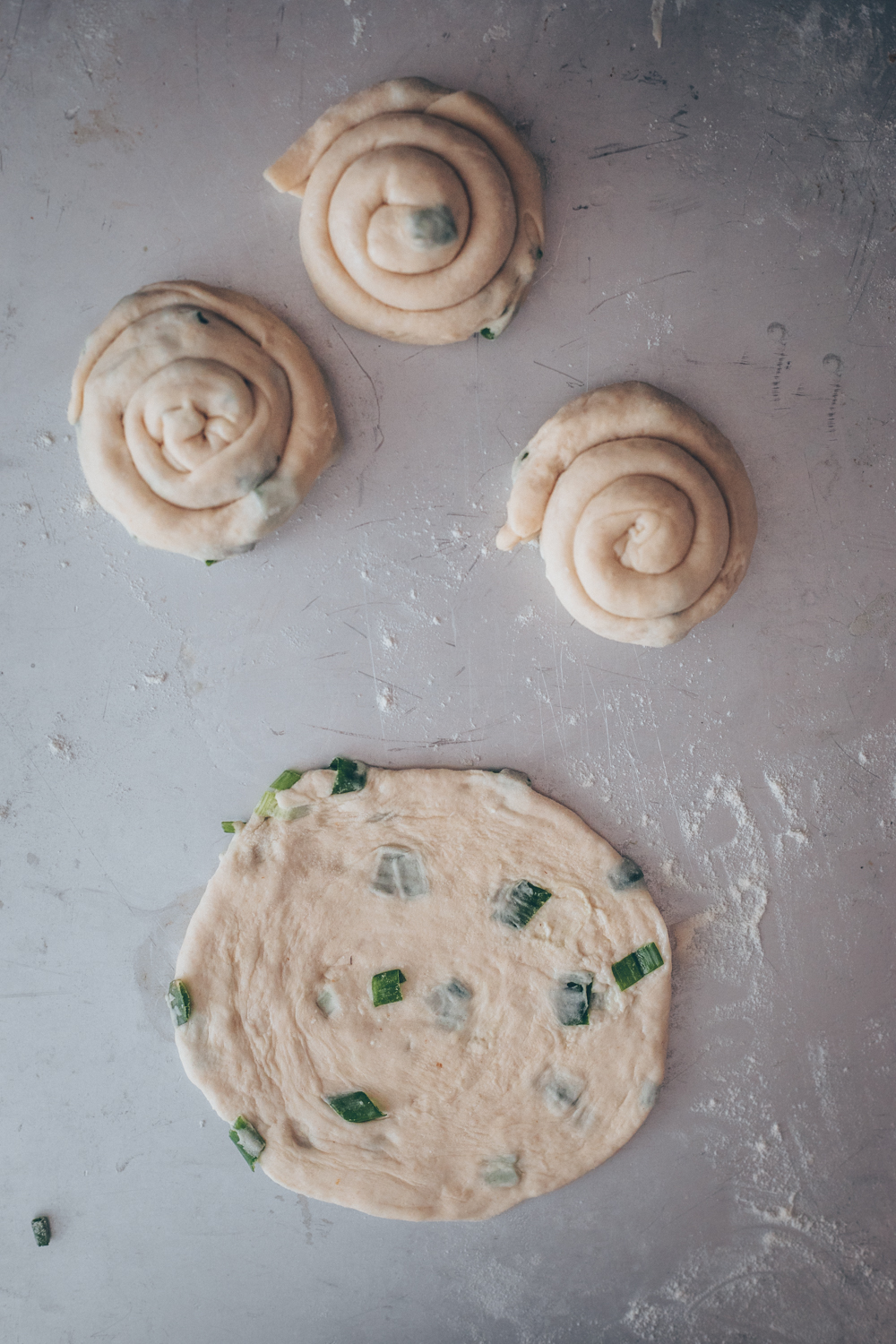 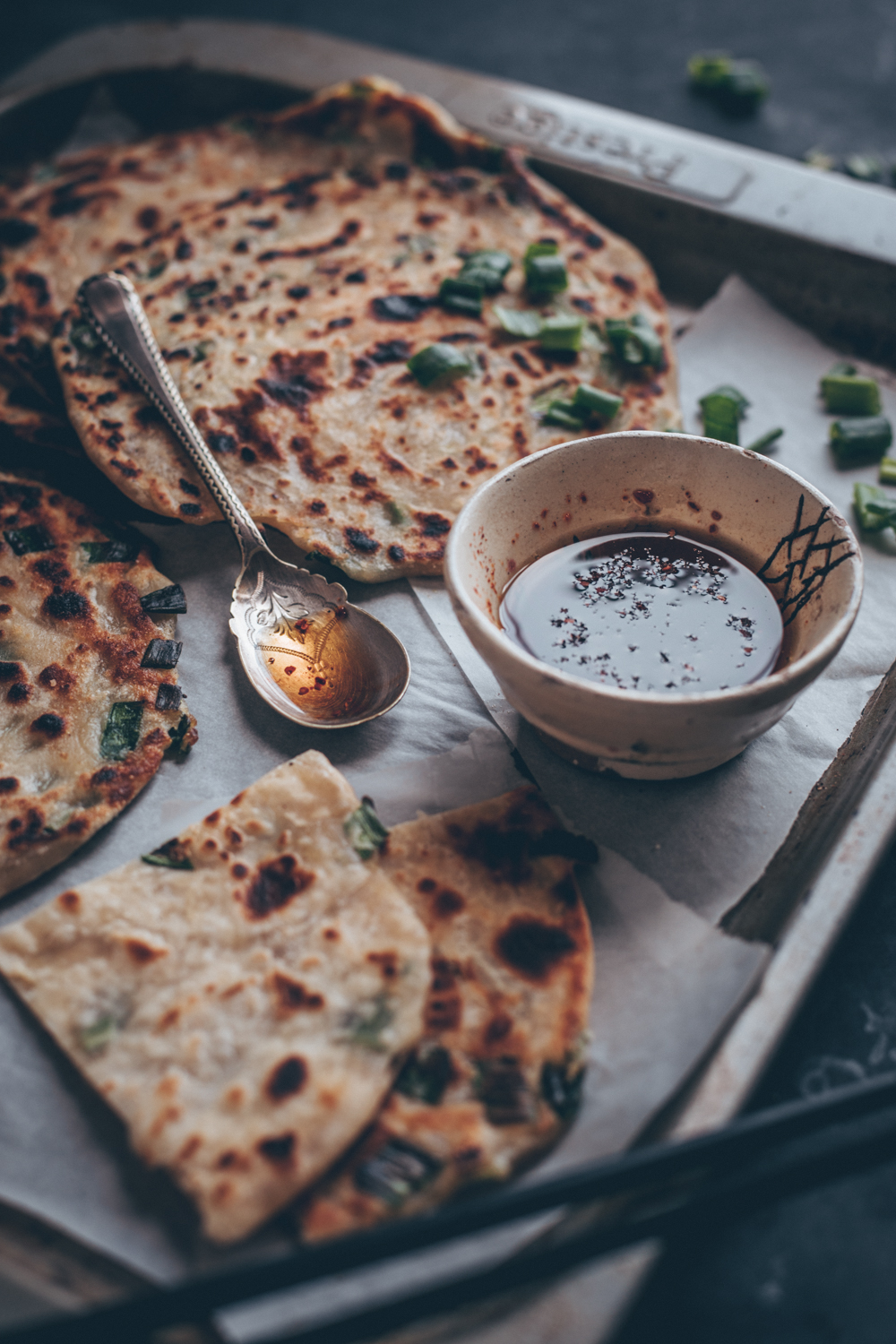 Back to my Chinese Scallion Pancakes. They are also known as Spring Onion pancakes. Or Green Onion pancakes. Usually served as an appetizer with some dipping sauce, I like to eat them fresh out of the pan with a green salad. My boyfriend prefers to have his as a quesadilla. Simply fry two pancakes, add some grated yellow cheese (or even minced meat) on top of one pancake, then top with the second one, press together with a spatula and fry until cheese is melted.

Scallion Pancakes (Chinese term is Cong You Bing) are widely know in China and its popularity similar to doughnuts in the US and pizza in Italy. It tasted a little like other Asian flatbreads such as naan but the addition of chopped scallion as well as the rolling and coiling method makes this a very nourishing and flaky fried dough. 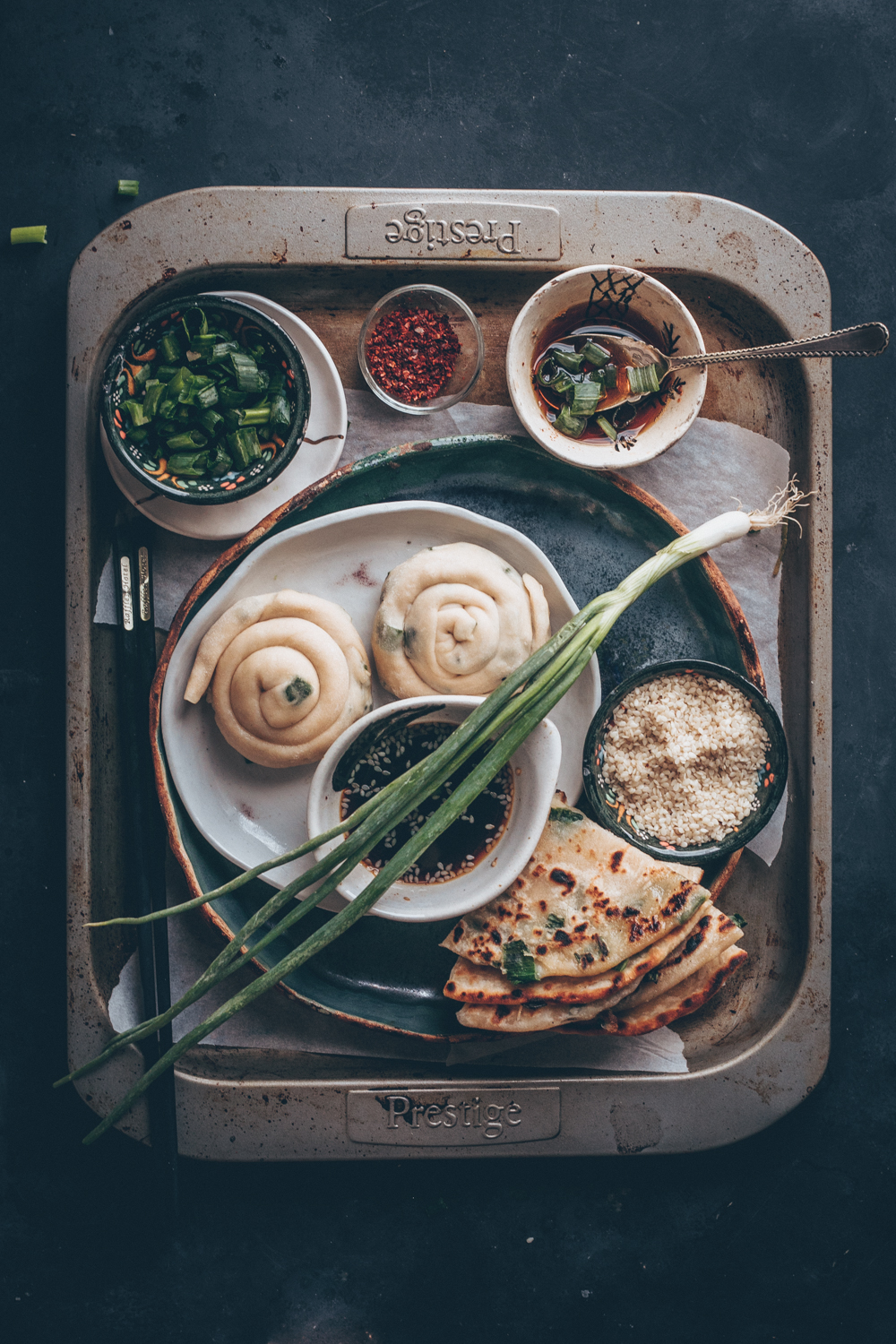 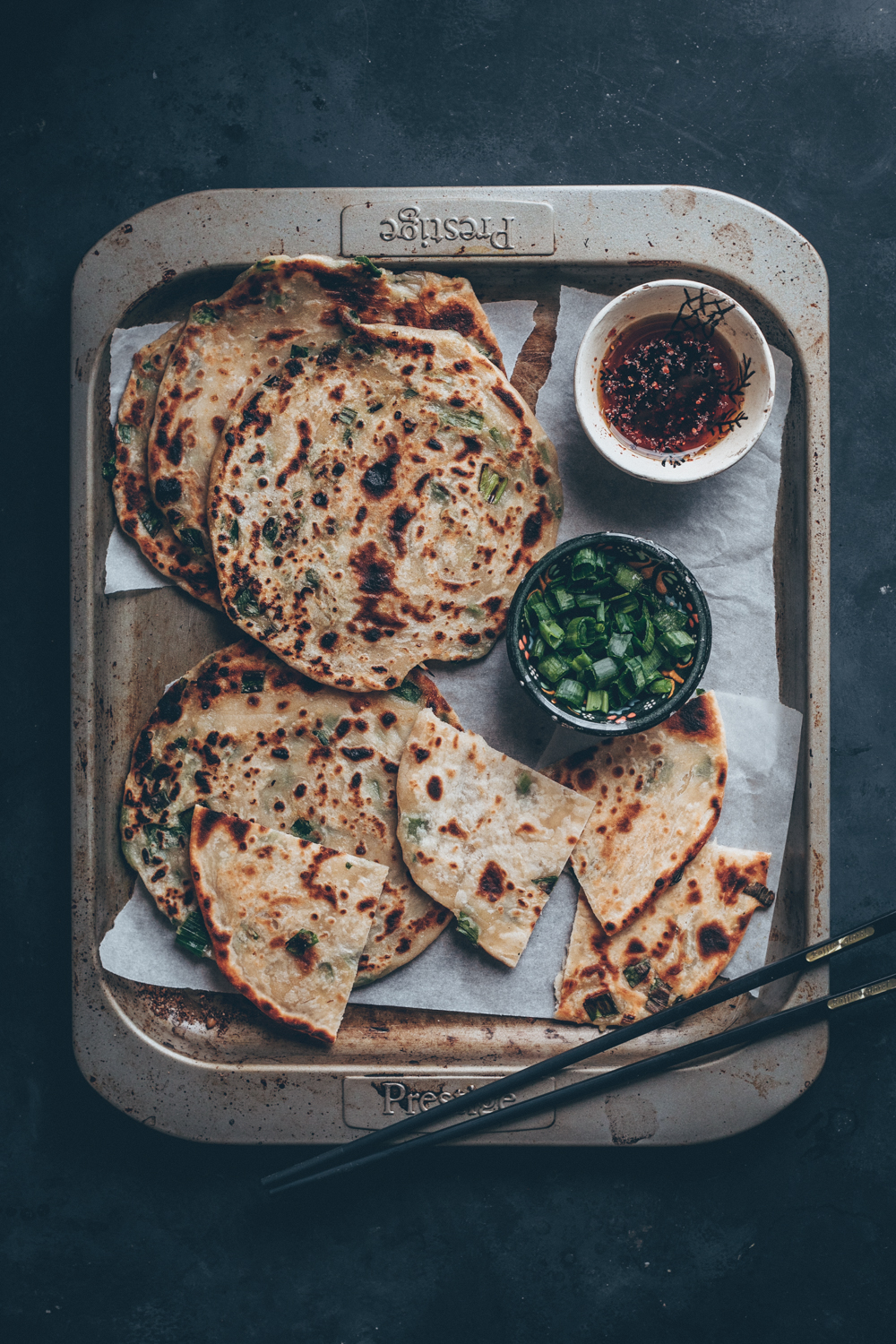 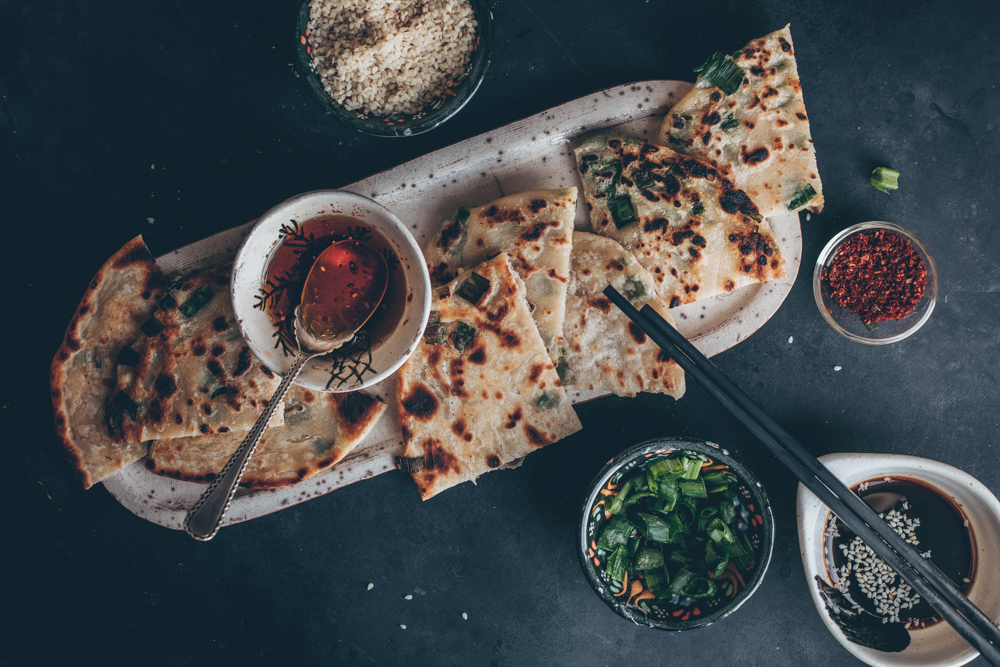 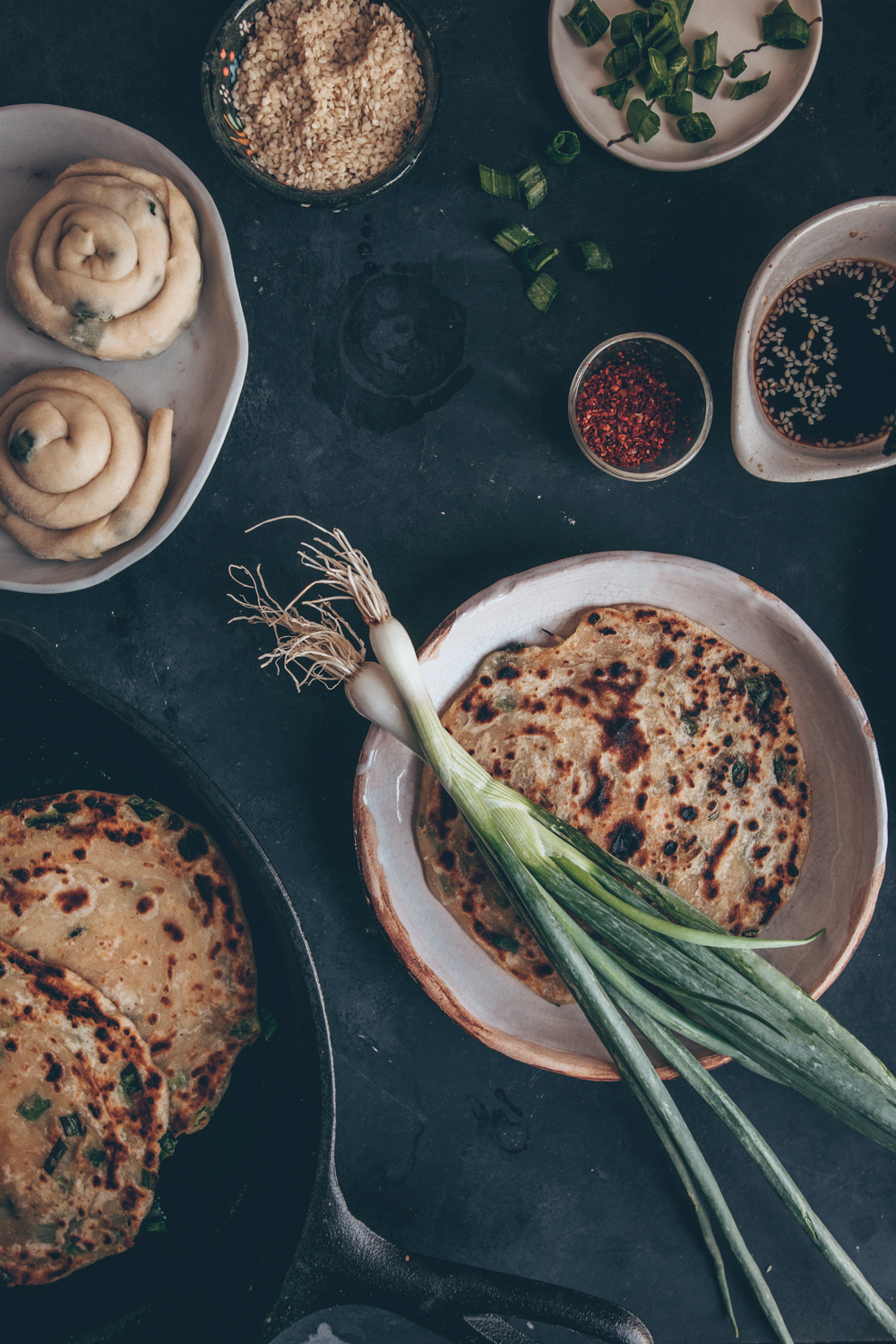 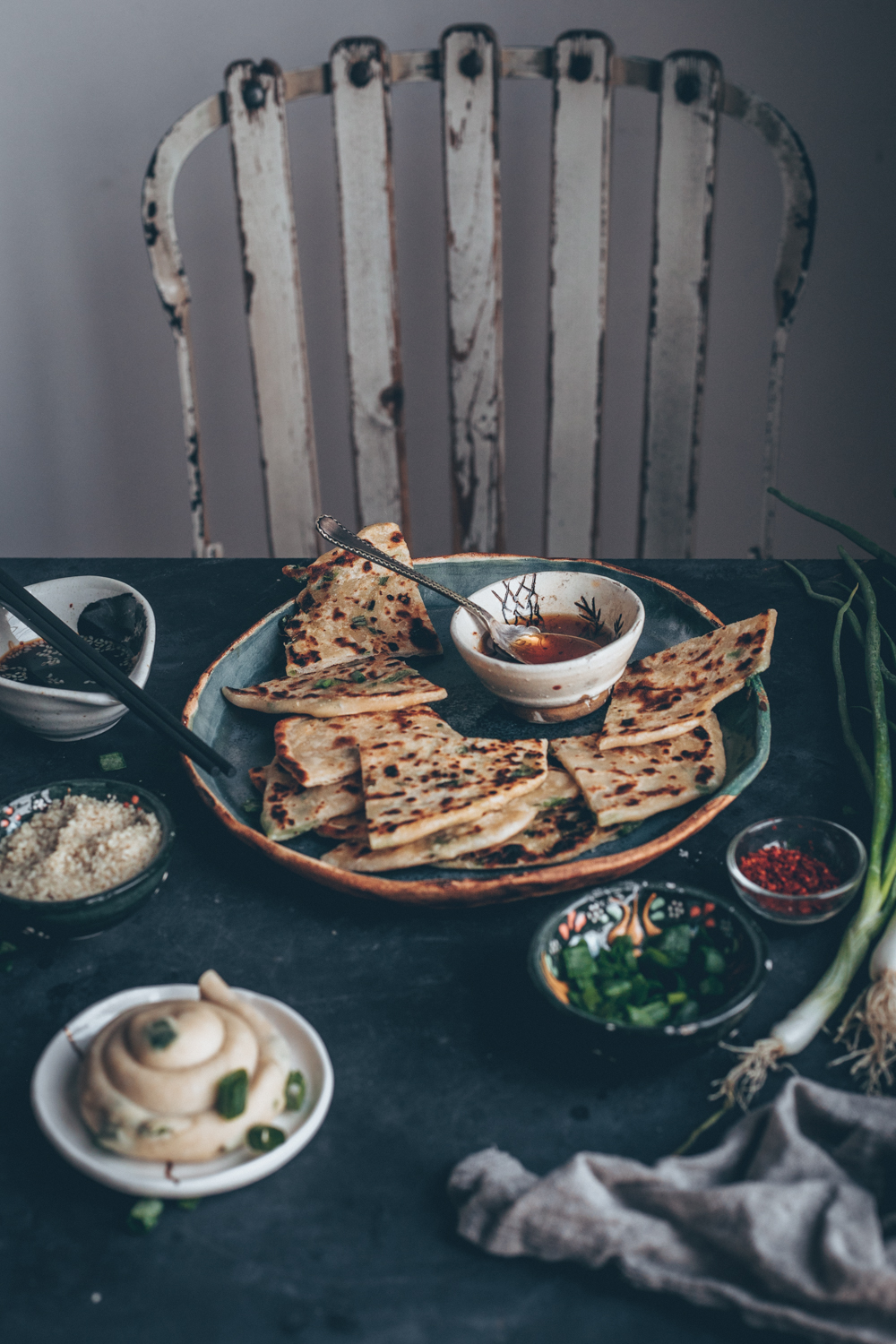 Previous Post: « SPANISH PEACH AND TOMATO GAZPACHO (CHILLED SUMMER SOUP)
Next Post: WANDER STORIES | FALLING BACK IN LOVE WITH AMSTERDAM AND (ITS) COFFEE »