In one of my latest Instagram posts I talked about the concept of home and what it means to me.

Living abroad since more than 12 years, I often get asked if I miss home. I always say no. Then people are confused and ask ‘So where is home for you?’ It’s everywhere. I’ve lived in 10 countries on 4 continents. For me home is not a place. It’s not a mindset, not a feeling. It’s not about nostalgia. And it’s not a person. Not a single experience. Neither is it the sound of crushing waves, nor the smell of my grandma’s cooking. It’s everywhere. In all of the 10 countries I’ve lived, no matter if it was for years or only a few months. It’s also in all of the 70 countries I’ve visited, every city, every meal, every new friend. Home for me is everywhere. Home is literally where I’ve been, I am or I want to be.

The response to sharing my journey and my thoughts on it was incredible. Many shared their stories too and the countries they had lived in so far and I absolutely loved reading about it. There were also a few people who were interested in the how and why. And I thought my blog is a good place to share a little bit more about this side of my life. 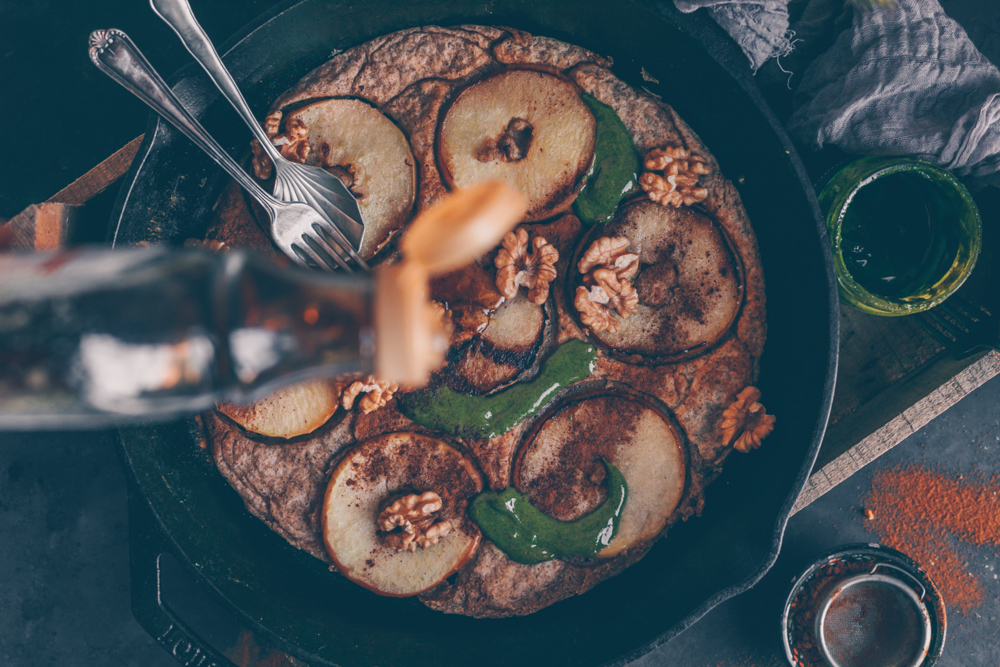 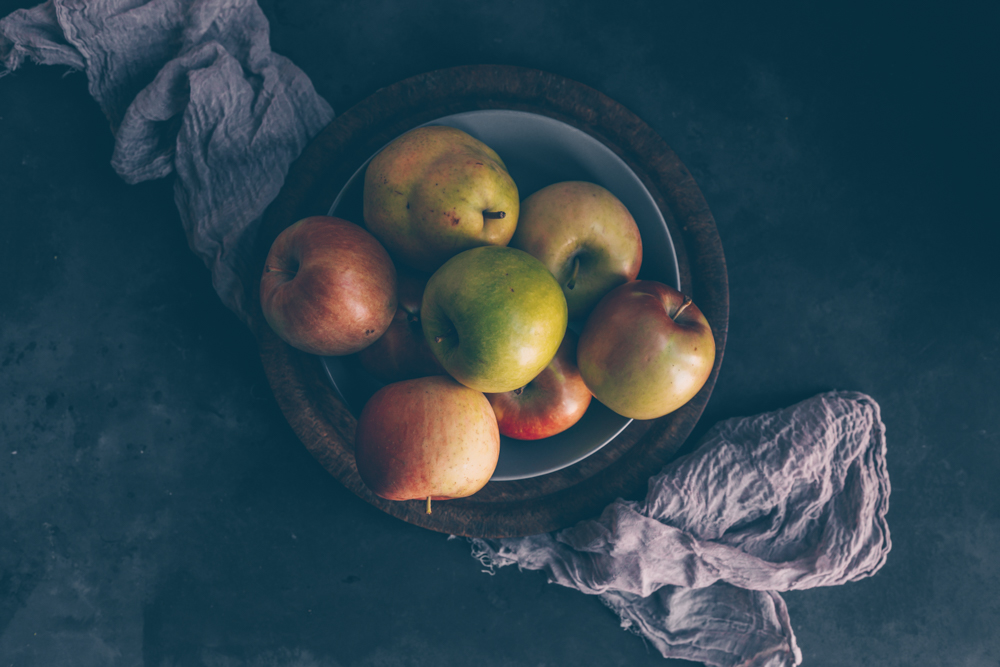 As you probably know by now I was born in Germany. Actually I was born in the former GDR, or also known as East Germany. Around us was a big wall and no one (except for a few people with good relations) was allowed to leave. Travelling was restricted to a handful of other socialist countries and food was limited to a few local ingredients. That meant no bananas or other exotic foods and vegetables. When I was 4 years old the wall went down and with it came a new world. Luckily my parents as well as my grandparents were always very openminded and curious, so it didn’t take long before we went on our first trip abroad.

I love my home town and I love Germany but my love for foreign countries was always bigger. I did my first trip alone to Poland when I was five (for summer camp). At the age of 11 I spent a summer in England and walked around London alone with my friends. Throughout my teenage life I went on a few trips without my parents. Like the time when I joined some friends on a bike tour through Danmark or a party trip to Italy. I also spent a year in the States, doing some kind of High School exchange. My parents have always trusted me to be responsible and I’ve never been in any situation that proofed them wrong.

So when I graduated High School it went without saying that I wanted to study abroad. At that time I had never travelled to Asia or Latin America and I initially thought I never will (because what’s so interesting about these continents anyway, right? *irony*). So I picked a university in Europe and went to Rotterdam, the Netherlands for my Bachelor’s degree. And now comes the moment I can kind of attribute my severe wanderlust to. As part of our third Bachelor year we had the chance to go for a semester abroad. I had my mind set on some Scandinavian university because you know, Scandinavians are just very good with their educational system. 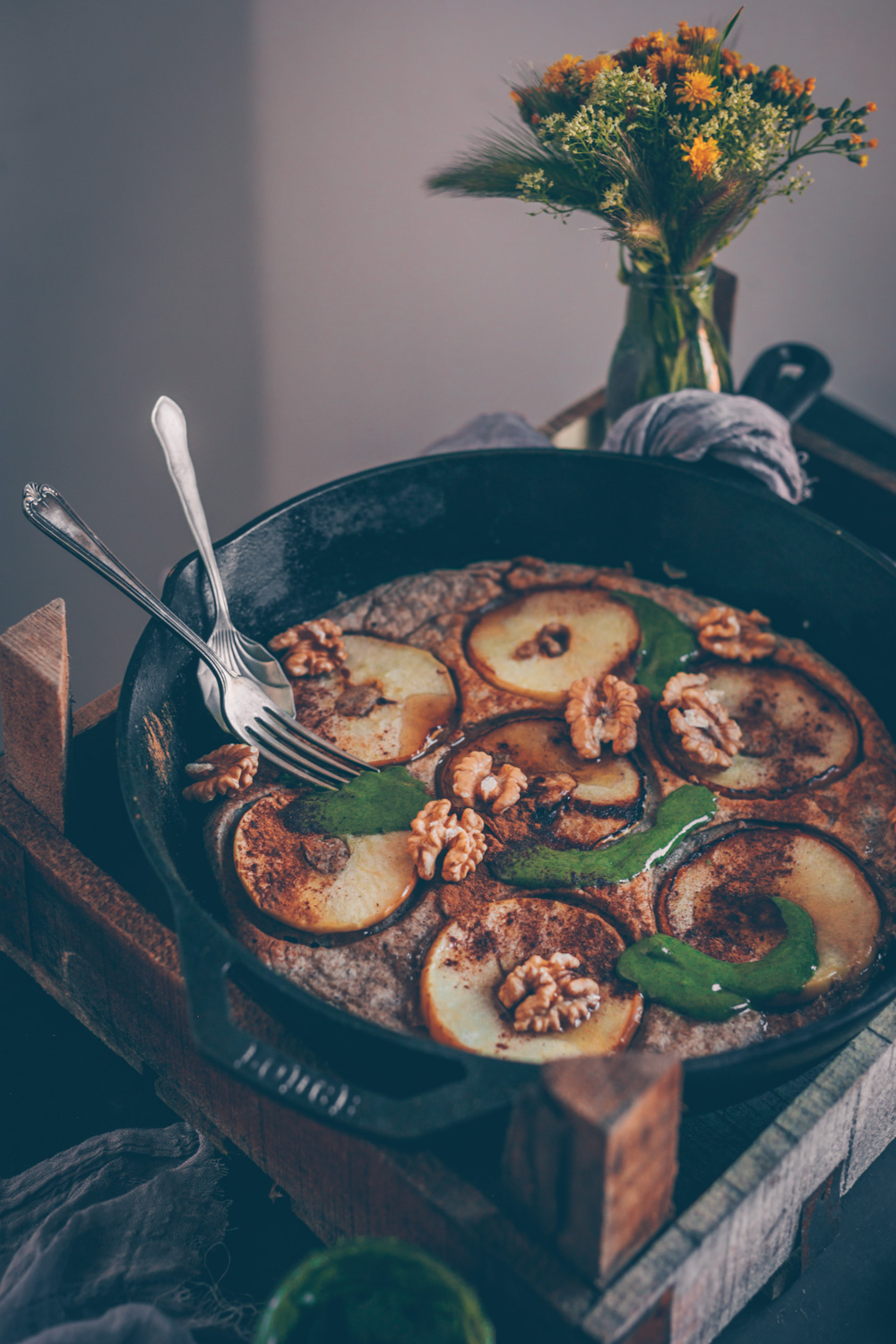 As part of my university’s attempt to convince more students to go abroad, they had scheduled a week where each partner university had the chance to introduce themselves. I had my application already filled out for that said Scandinavian university when one afternoon a class mate asked me to join the talk from an Argentinian university in Buenos Aires. I went with hesitation. And I thought that it’s a waste of my time because I didn’t speak any Spanish and I strongly believed Latin America is not for me. 45 min later had thrown my old application in the trash, filled out a new one, went to the head of our department and told her that I wanted to go to Argentina. Without knowing a single word of Spanish. Or anything at all about Argentina or Latin America. But luckily my application got approved that same day. Because when I lay down at night I couldn’t believe what I just had done.

When I called my mum to tell her the news, her first reaction still makes me smile today: “You will get kidnapped over there”. She obviously didn’t know anything about Argentina either but changed her mind when she came to visit me a year later. From then on my world was turned upside down. I discovered my inner adventurer and it has not left me ever since. I went to Argentina in 2007 and at that time I had probably only visited 15-20 countries, maybe even less. It’s only been in the last 10 years that I travelled so much.

Back home in Europe after an amazing semester in Argentina, I went on to Birmingham, England to do my Master’s degree. At the end of it I went for a summer to South Korea and participated at a summer campus program. From there I went to Bordeaux, France to do a second Master’s degree (yes, I love studying). My first job brought me to Munich, Germany but after my boyfriend (who is also German but was working in England at that time) got a job offer in Hong Kong, I knew that a long distance would be super difficult. And though I had the perfect job, a cute little flat, amazing friends and a great life in Munich, I couldn’t say no to this opportunity.

Since Hong Kong we’ve been moving to new places together. First to Cairo and then to Istanbul where we are living now. Somewhere in between Hong Kong and Istanbul I found a job which allows me to work from wherever I want. It’s a luxury but I worked hard for it and now I’m very thankful that it allows me and us to live the life we love. A life full of travels, adventures and new home. 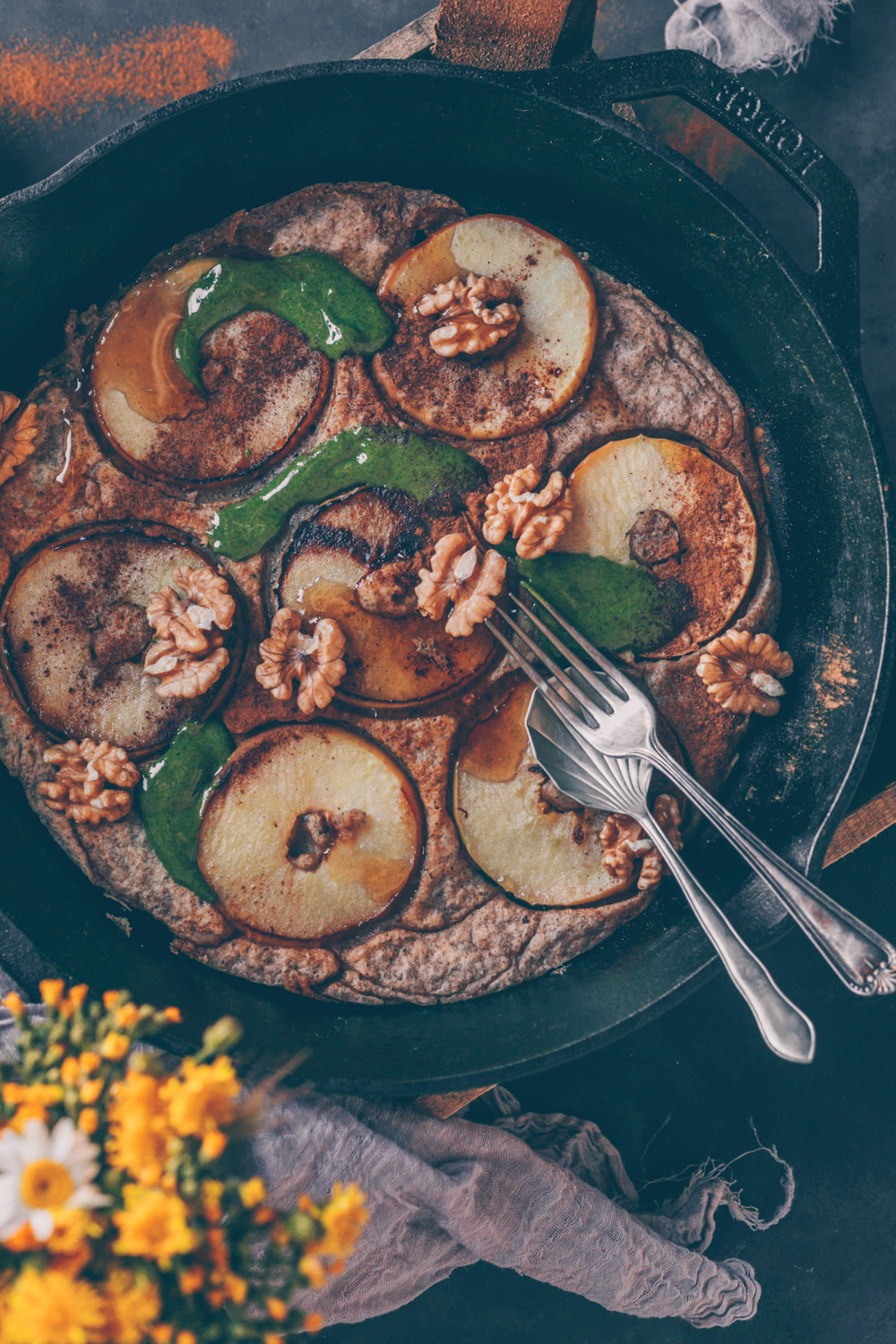 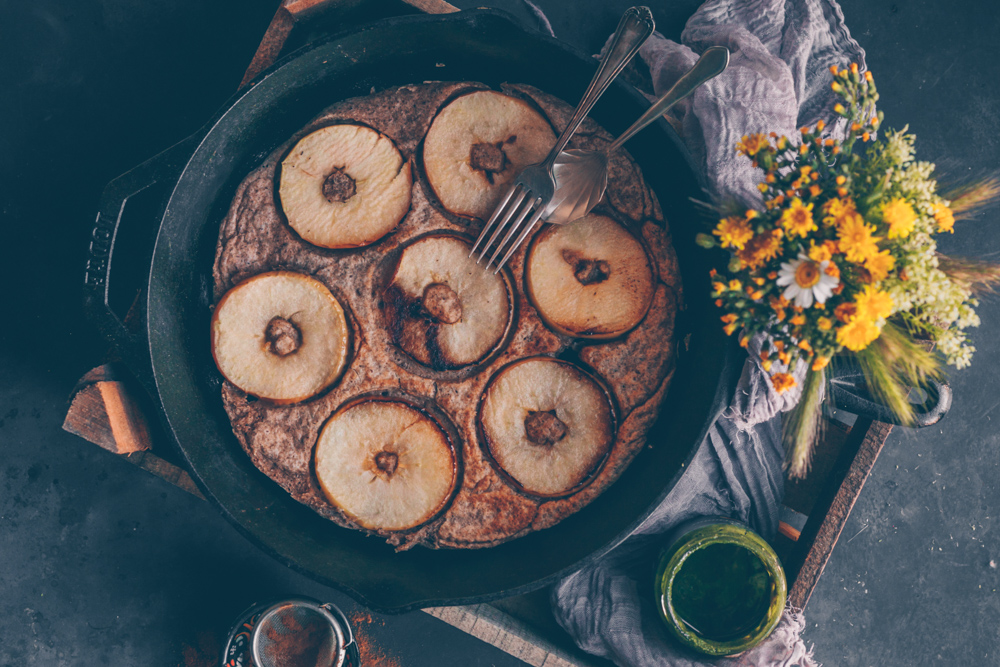 My roots however will always be German and so are my memories shaped by my childhood and adolescence. One of the very first meals I learned to cook by myself are these German Apple Pancakes. Or actually, it’s one giant apple pancake. It’s not comparable to fluffy American pancakes but it’s middle is more custardy and moist. Germans also call them Apfelpfannkuchen or Apfeleierkuchen, depending on which region your are from. One of the secret ingredients to make it a little fluffy is sparkling water. I always thought this was only my grandma’s way of making these apple pancakes but I learned upon researching this recipe that it’s a German thing. Who’d knew?!

Anyhow, when I made this vegan apple pancake recipe I felt transported back to my childhood and I really enjoyed that little trip down memory lane (doesn’t always need to be to exotic countries). I used spelt flour instead of wheat flour because I like the taste better. And it makes slightly more healthy pancakes. 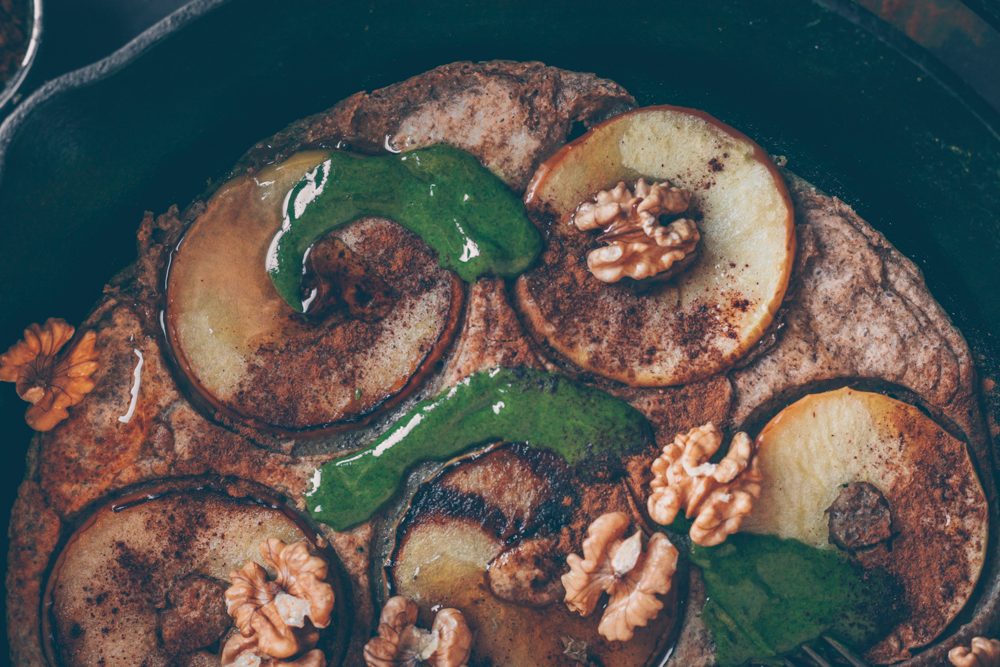 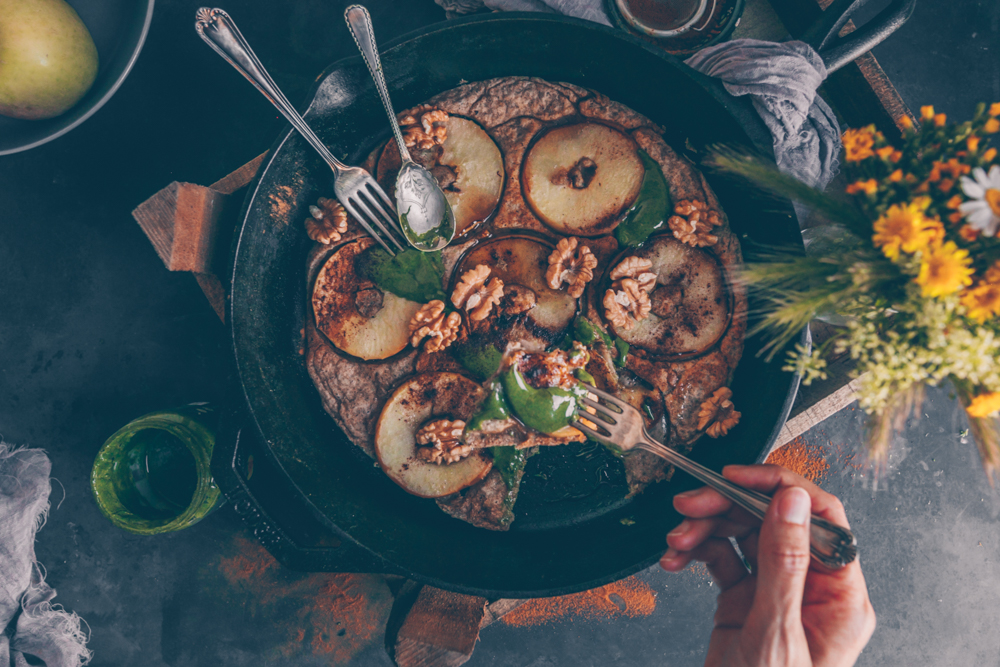 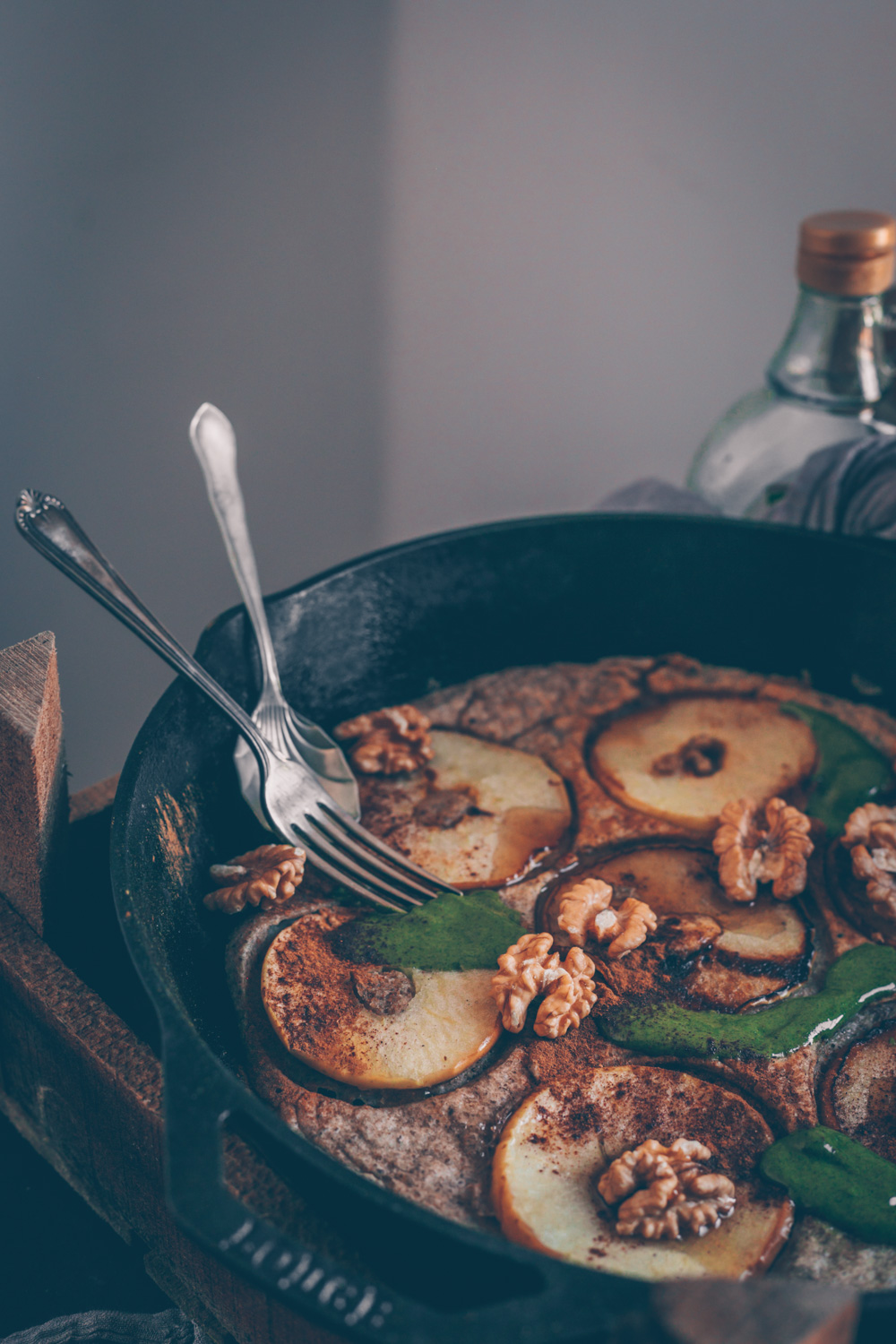 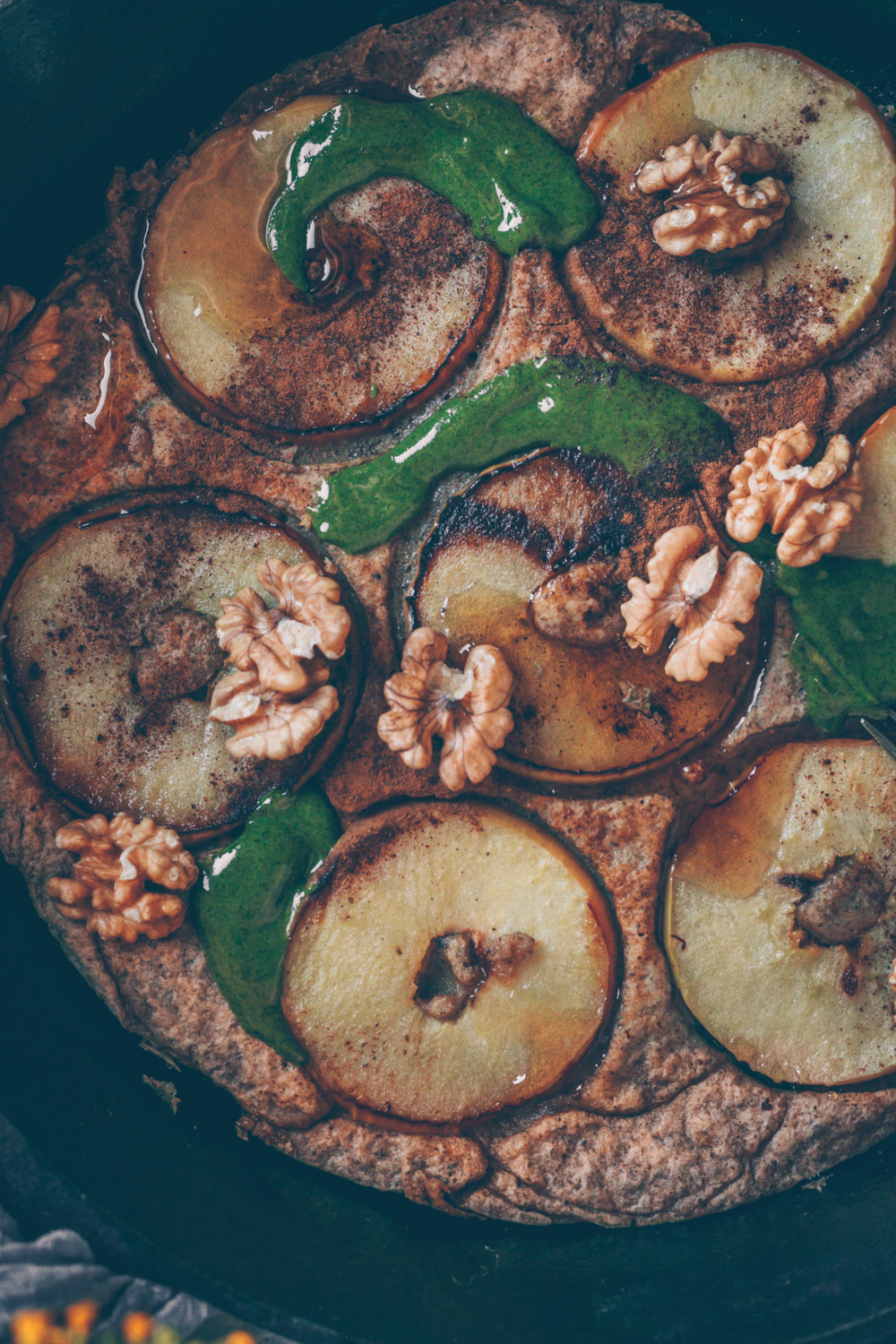