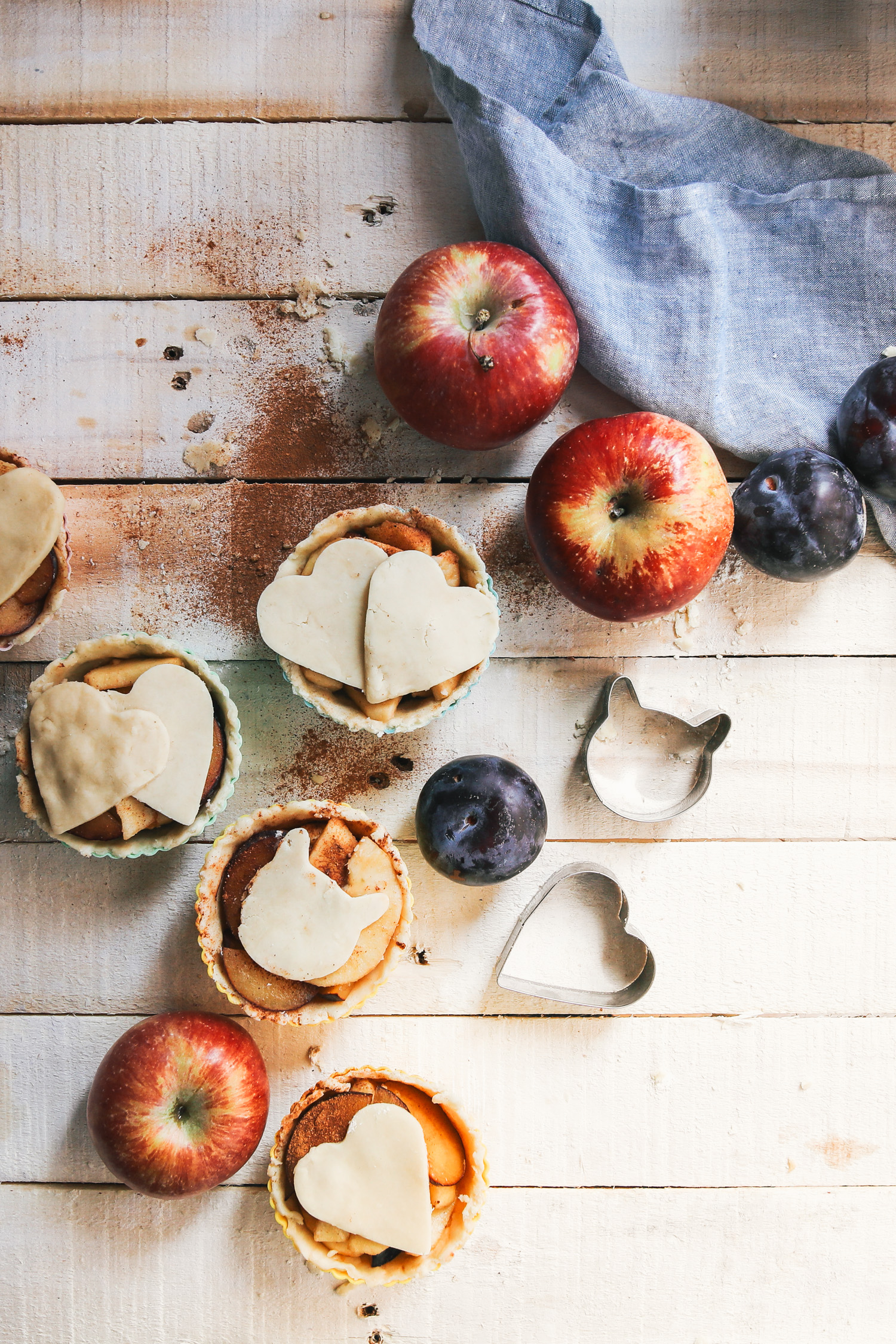 Hello, hello and happy autumn. I know the beginning of meteorological fall on the 1 of September seems like centuries away. But there are two reasons why it took me so long to finally welcome my favorite season into our home. First and most obvious, the weather. Istanbul was “gifted” with a hot summer and equally warm September. While I was seeing apple, pumpkin-spiced and warm golden mylk recipes popping up on my Instagram feed I was happy for every cooling food I could get my hands on. Though I was mentally ready for autumn I just wasn’t in the mood for hearty stews. Despite, the local produce in Turkey didn’t look very autumnally either. Until two weeks ago I could still buy the juiciest and sweetest strawberries. They are still available now but slowly loosing it’s delicious flavor so it’s not worth buying them anymore. 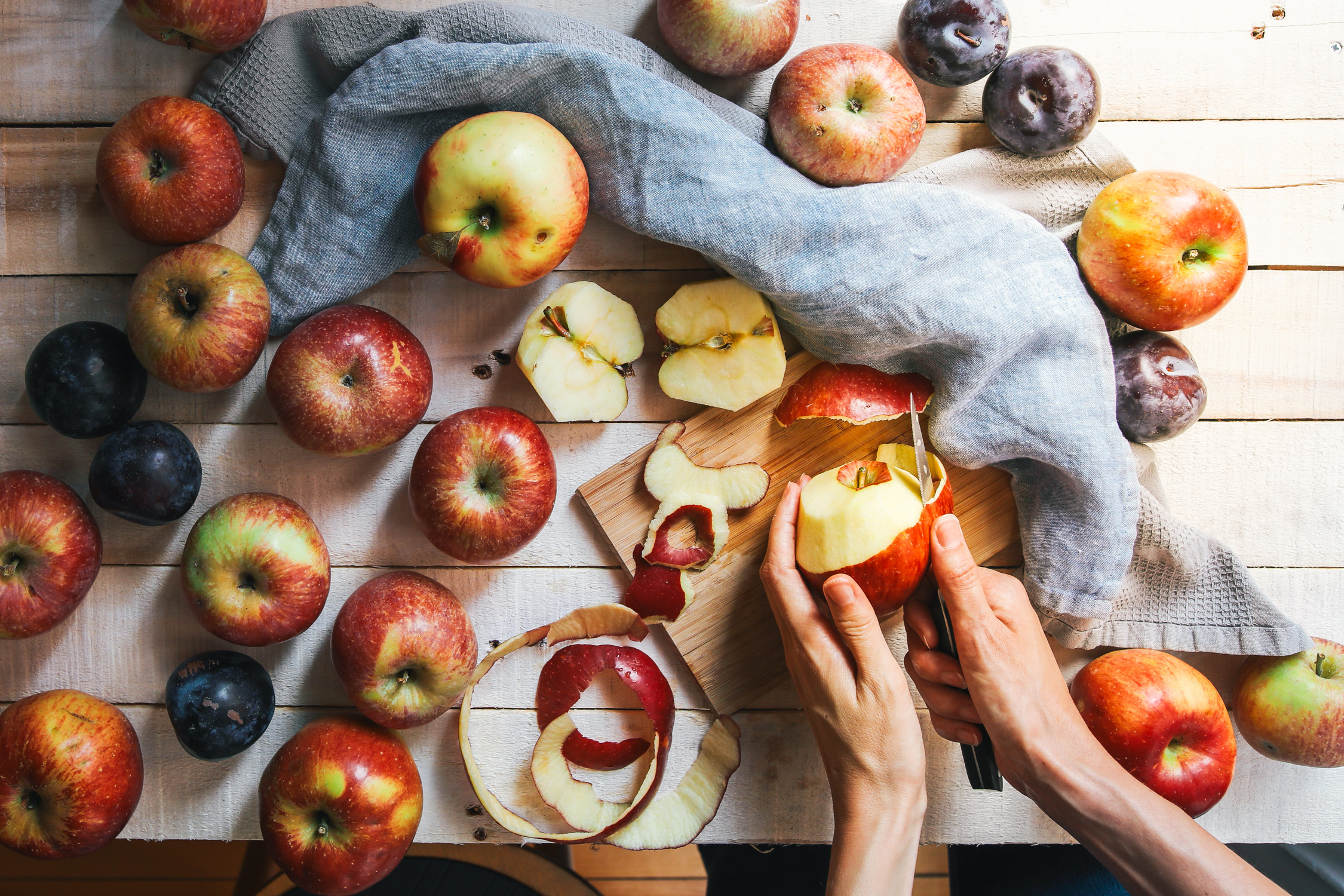 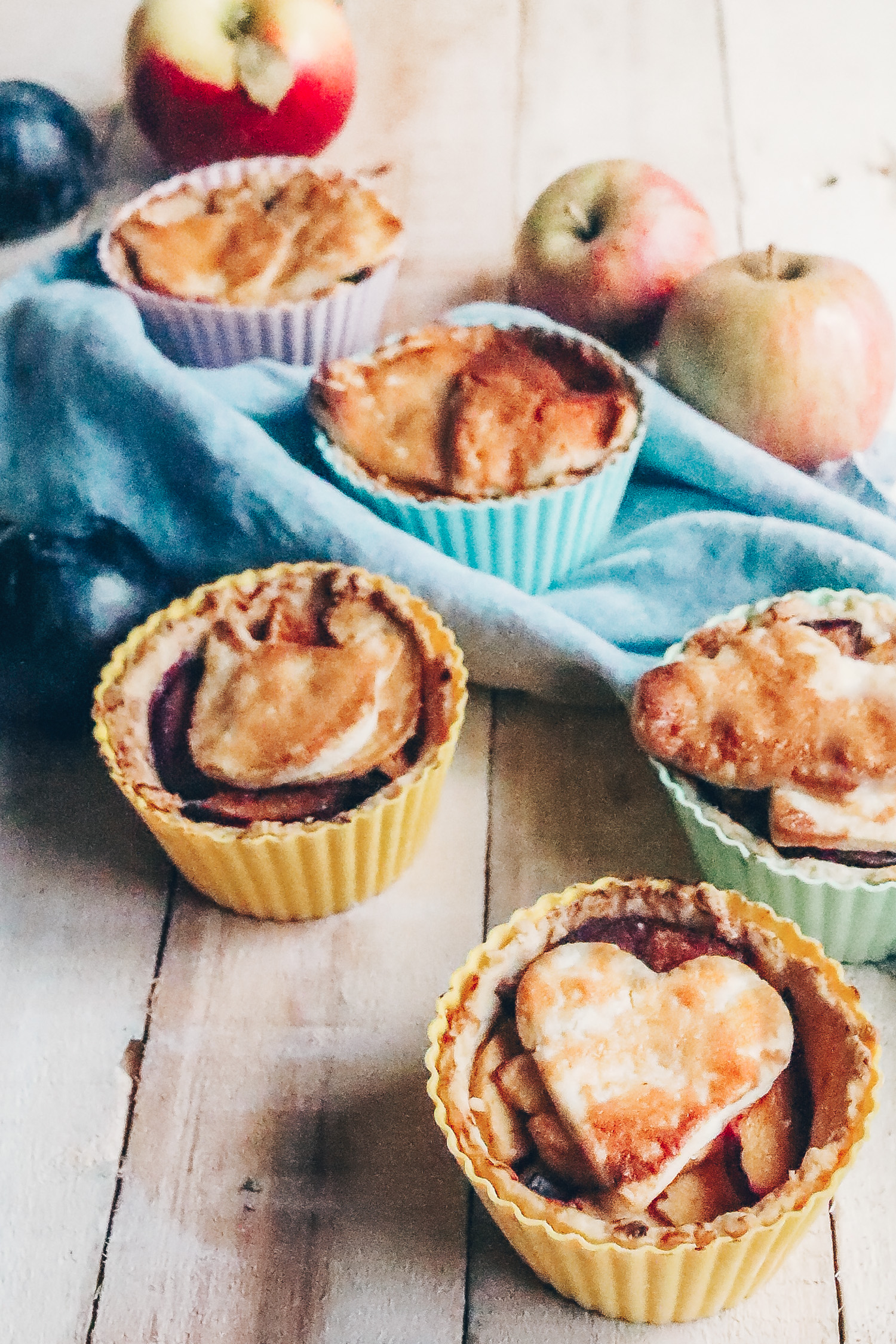 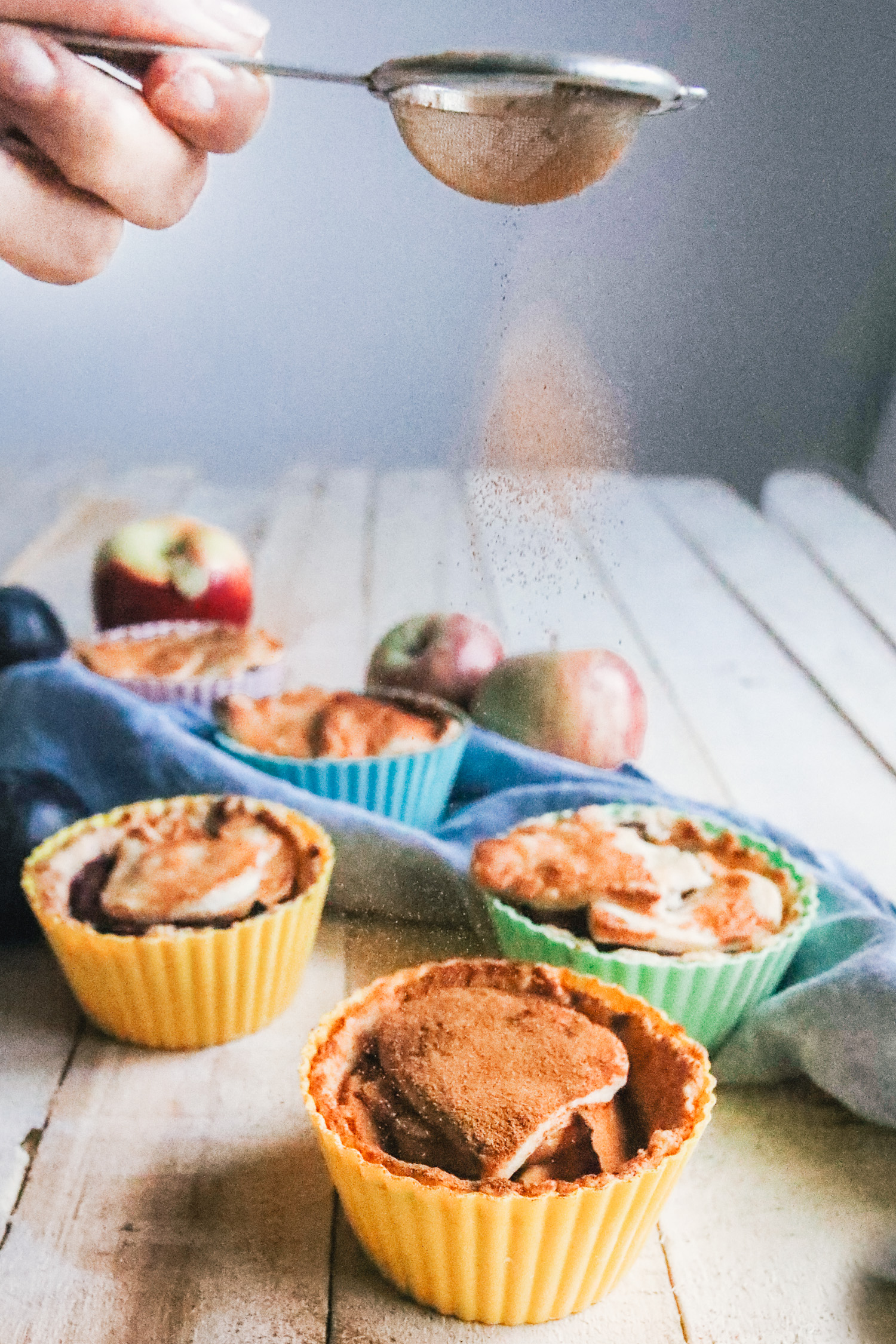 Secondly, I was travelling. Like a lot. Beginning of September I spend a long weekend in Lisbon. Just one week later I stepped on a plane to Romania and road-tripped from Cluj to Bucharest.  I went back home to Istanbul for a couple of days, unpacked, did laundry and packed again. And off I went to New York City for the SAVEUR Blog Awards. Wow, what an amazing few weeks.

But I’m more than happy to be back home with my cats and to my kitchen. And Istanbul’s farmers market that is now looking much more like one big autumn feast. Nothing reminds me more of fall than fresh, juicy, crispy and sweet apples. So I bought as many as I could carry and brought them home to make some apple plum pies. These pies are vegan, easy to make if you get the dough right and I love that you can get creative with decorating the tops. I choose hearts and cats because love and kitties warm my heart. And now that it is actually getting colder outside in Istanbul, I take all the warmth I get. 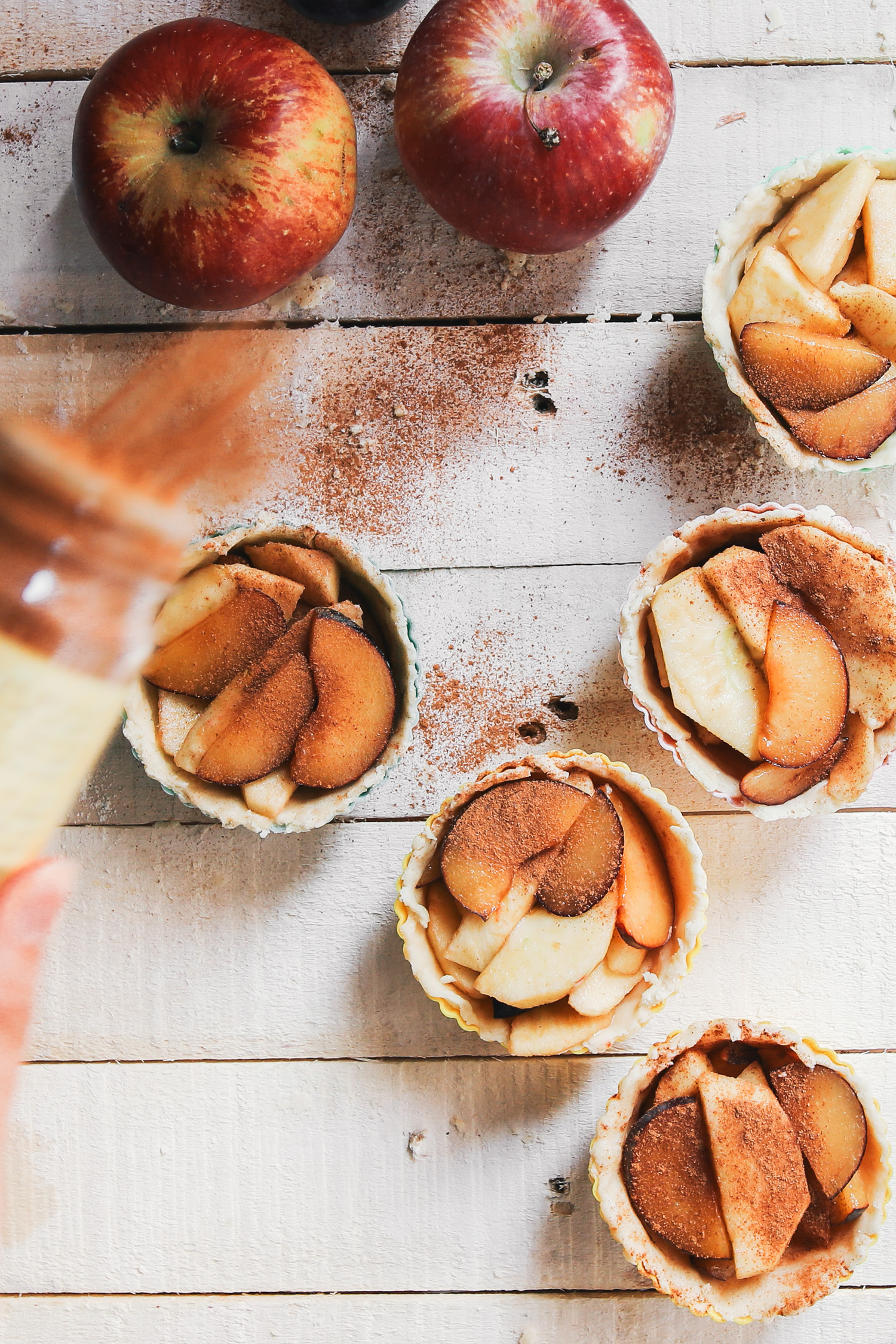 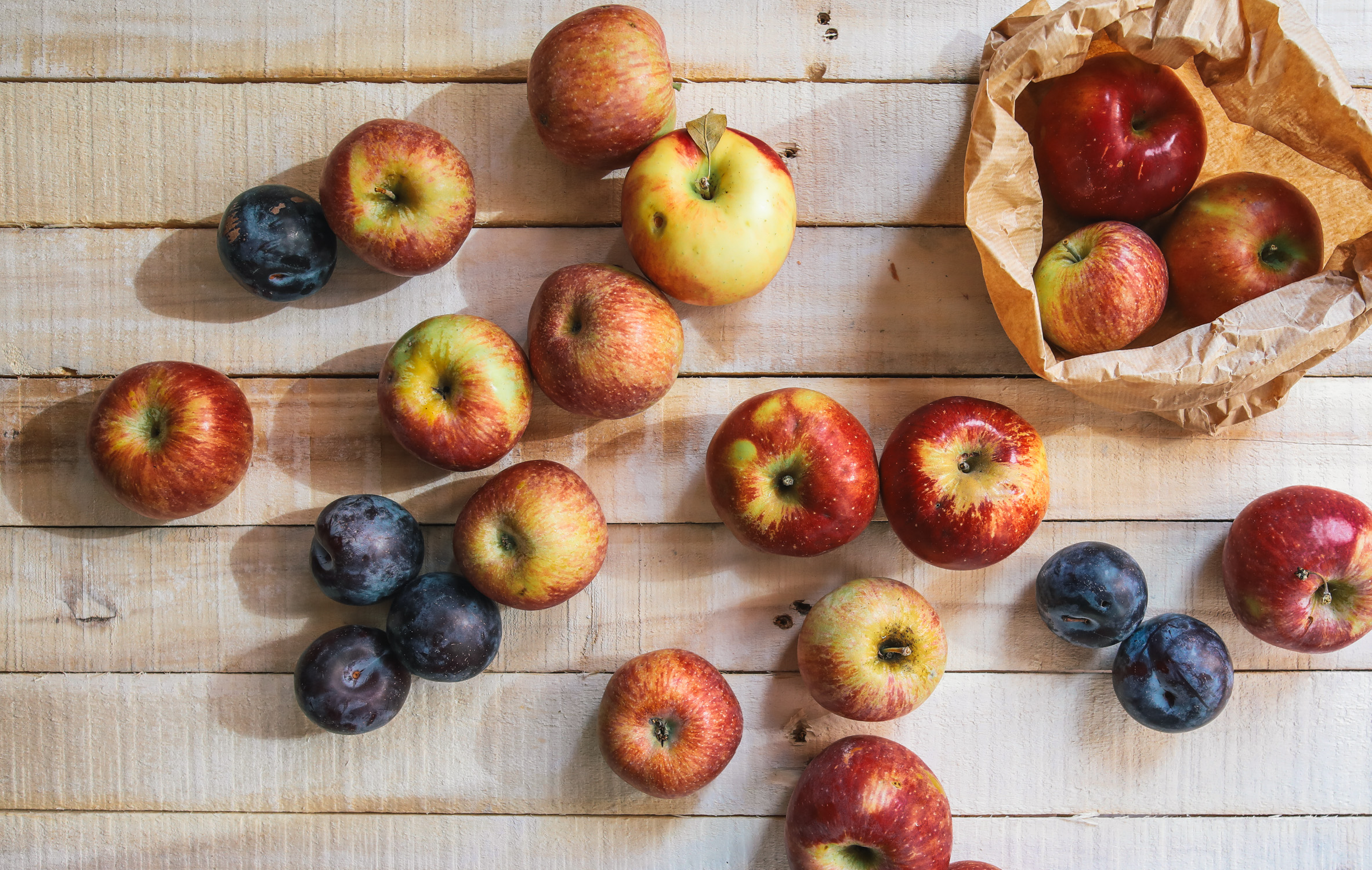 The recipe for the dough is by Minimalist Baker. It wasn’t easy to find a vegan pie crust recipe that didn’t call for vegan butter or shortening. Two things that are not available in Turkey. I honestly didn’t follow exactly the recipe instructions but I advise to do so to have a smoother baking experience. I, for my part, needed to shape and mould the dough a little more to fit into my muffin liners. But I thought it was quite meditative and the result was the same. Flaky, crusty, delicious pie crust. So if your coconut oil is a little bit more fluid than recommended in the recipe by Minimalist Baker and you don’t have the time (or patience) to cool it, just go for it anyway. The dough is quite forgiving and will still turn out great if final touches are made in the tins or liners themselves. 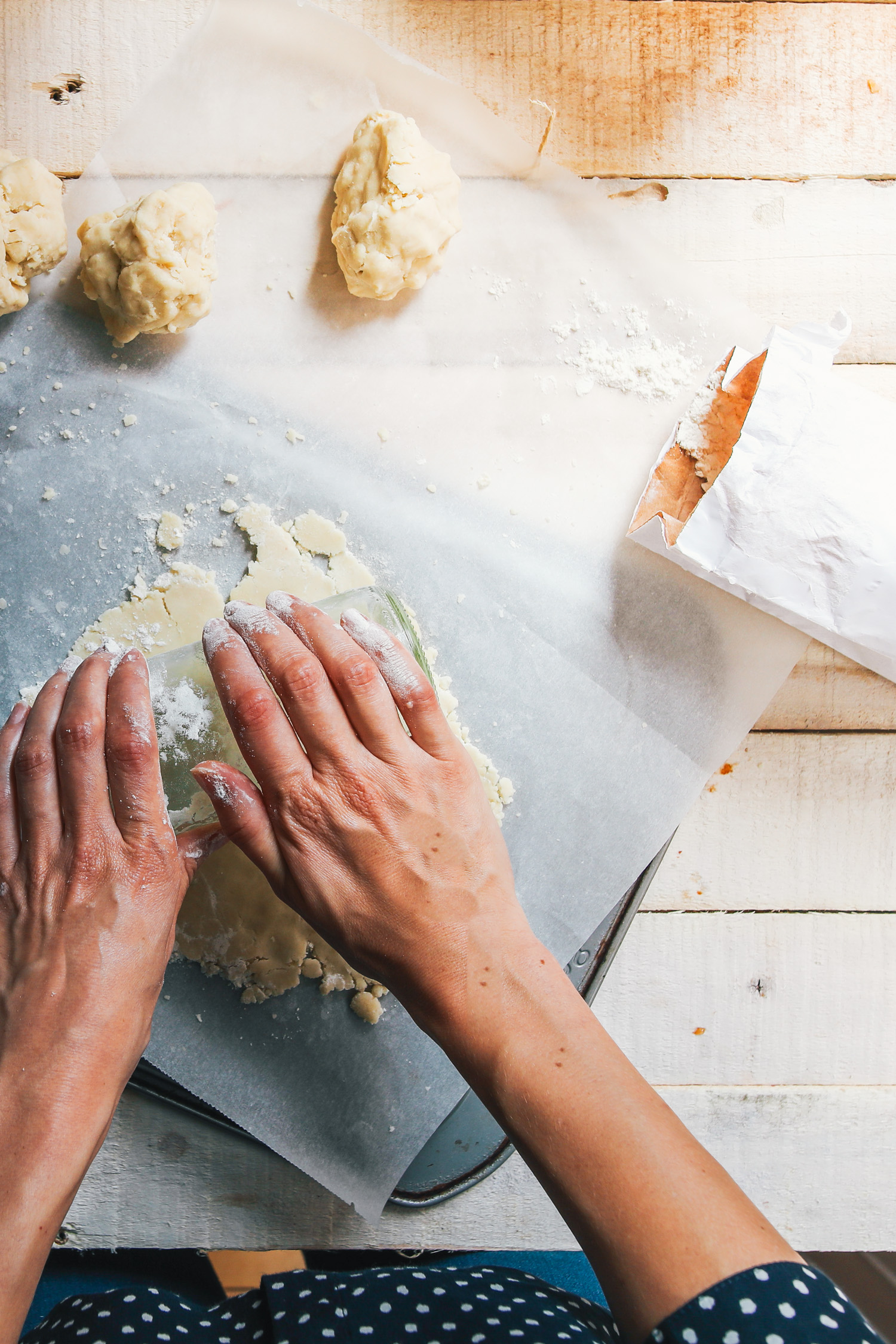 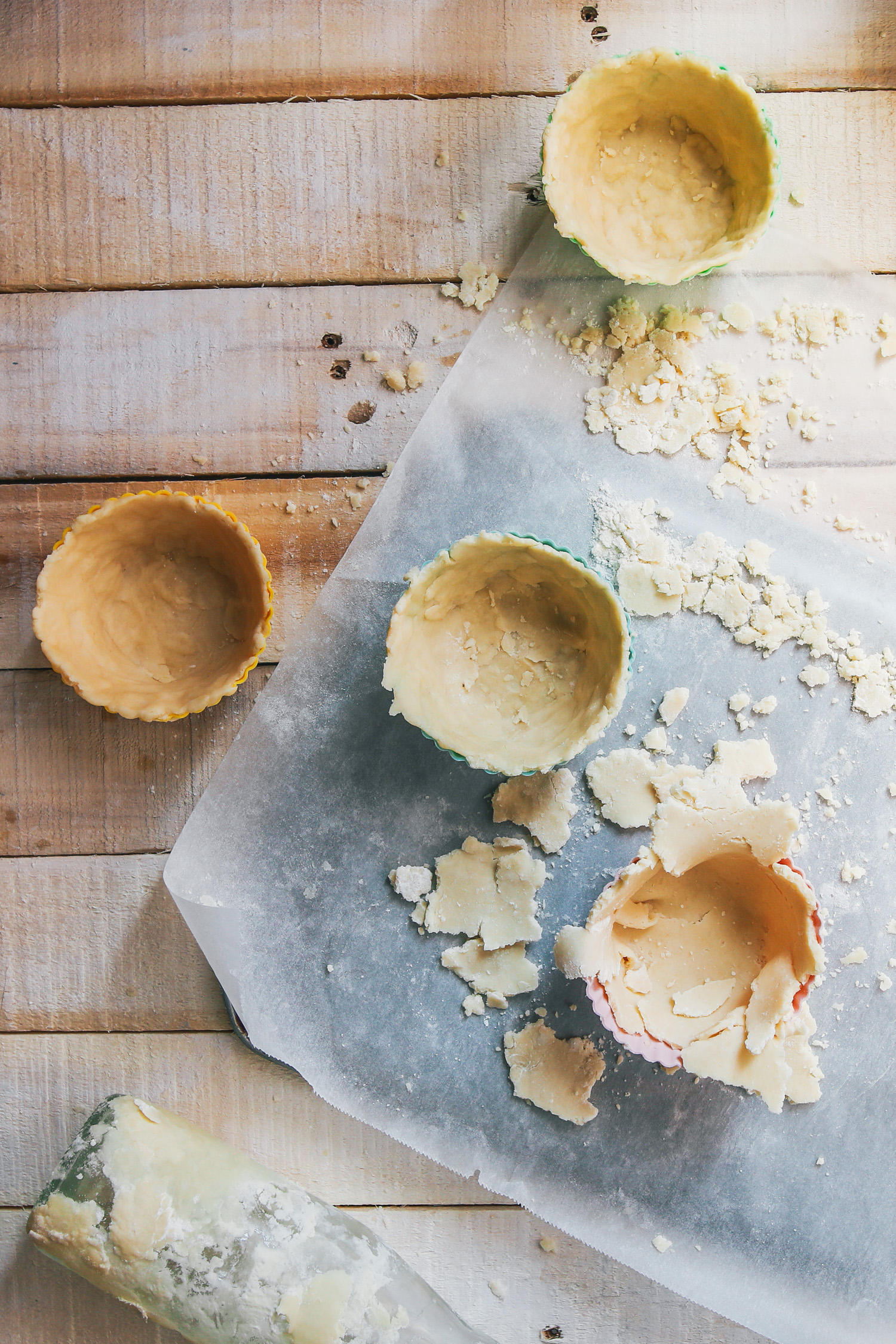 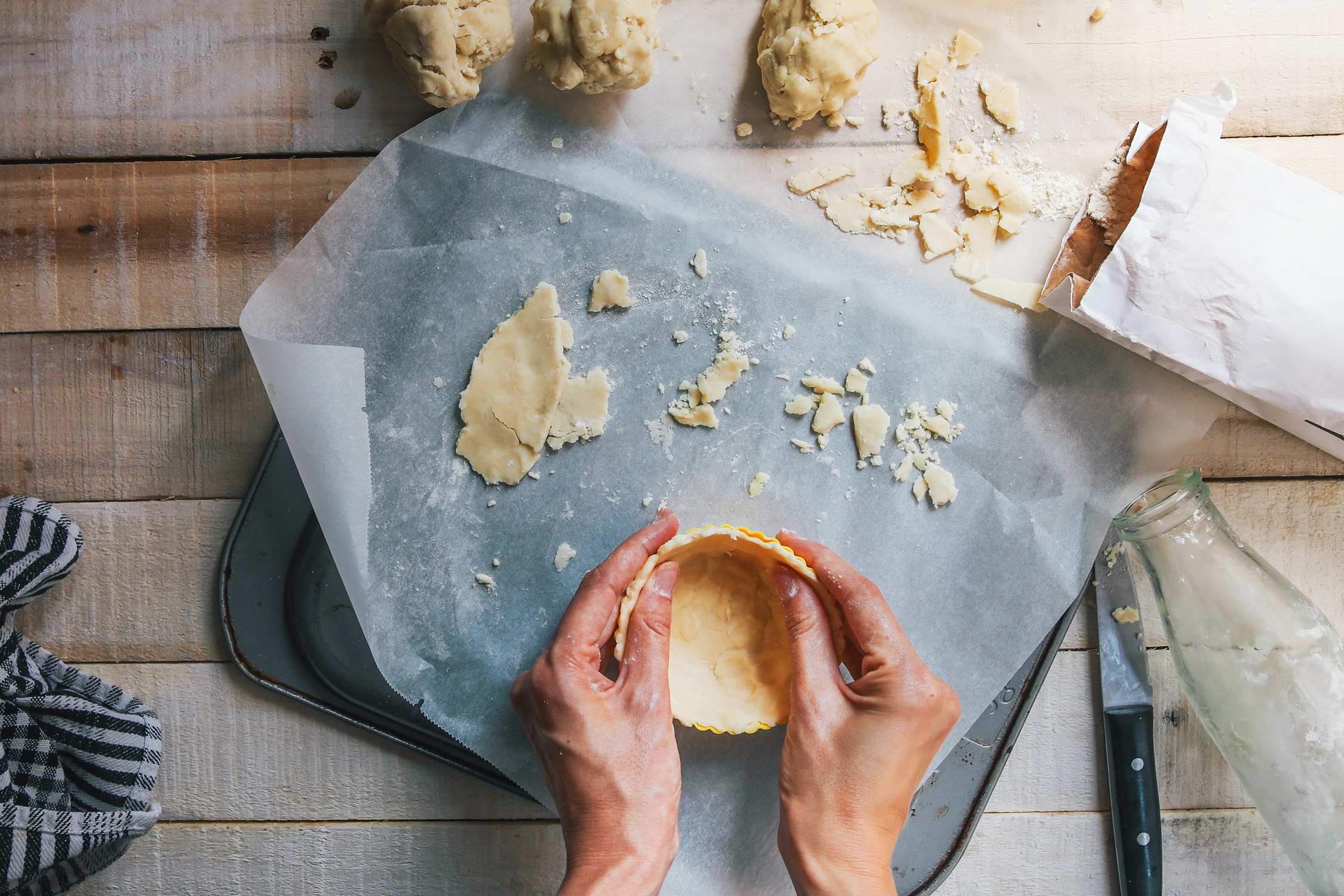 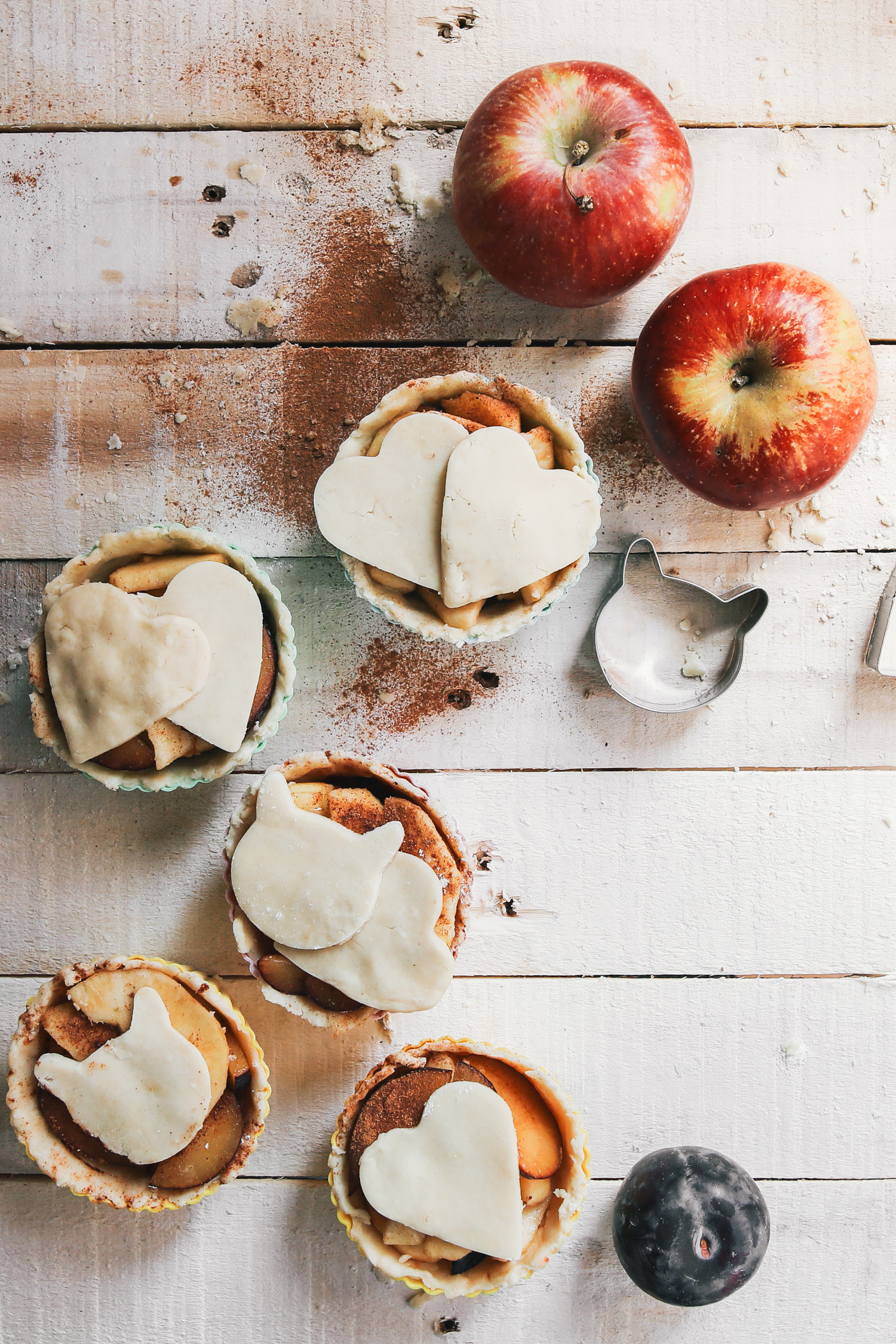 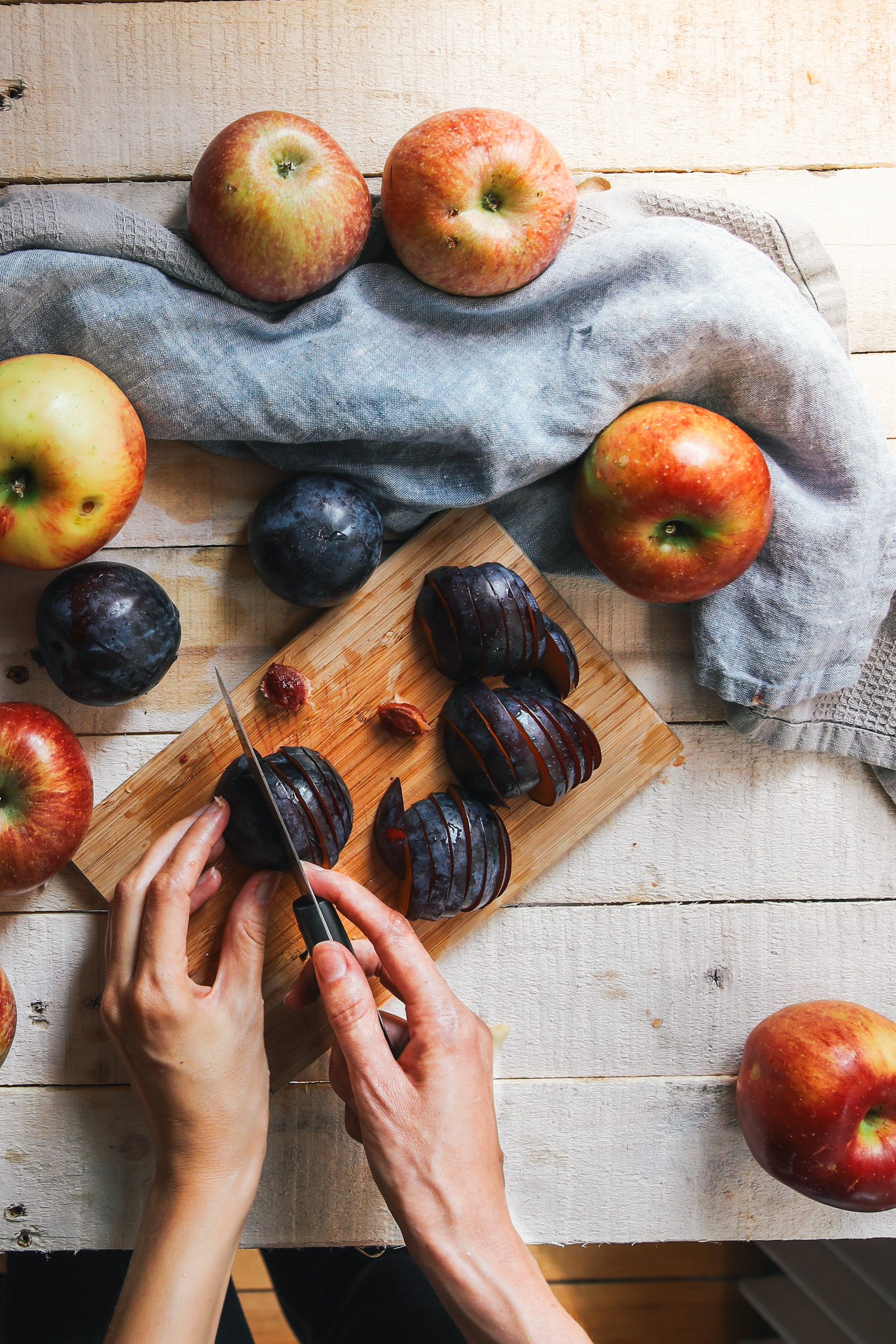 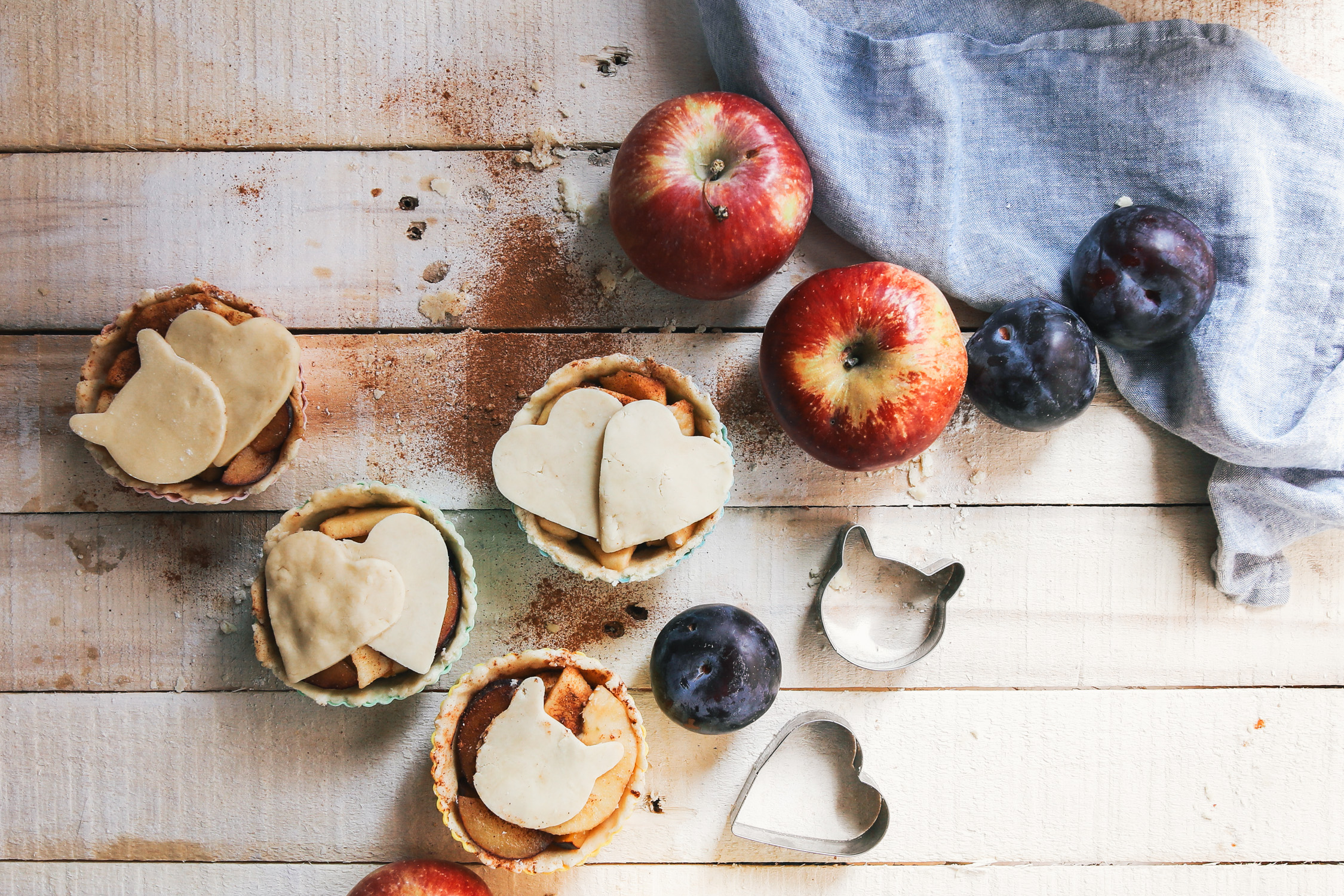